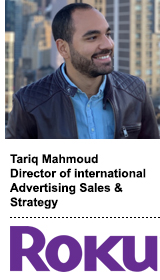 Roku’s go-to-market strategy is simple: Get as many streaming devices into as many homes as cheaply as possible, and monetize them through advertising.

Roku, which has 29.1 million active accounts, has become one of the front-running ad-supported OTT offerings in the market. Through rev-share deals, Roku aggregates inventory from content providers across its platform, on which buyers can overlay its unique first-party data set of registered, logged-in users.

Roku is going after both TV and digital budgets as they converge in the OTT space. In March the platform inked a preferred partnership with Adobe Ad Cloud, which allows programmatic buyers to onboard clients’ first-party data for a one-to-one customer match with Roku viewers.

And in a push for TV budgets, Roku this year brought its ad-supported offering to the upfront, where linear investment teams are eager to offset declines in TV viewing. Roku sells 15- to 30-second video ads and larger custom sponsorships such as home screen takeovers, screen savers and branded content.

Recognizing consumers are hungry for free OTT content, Roku launched its own AVOD channel, The Roku Channel, in 2017. The Roku Channel is also strategic on the ad side, where it opens up O&O inventory for the platform to sell as competition heats up in streaming.

AdExchanger: How quickly are brands transitioning to OTT?

About two or three years ago, agencies were in awe over the capabilities we have. Now they’re getting around to the realities of what we can do from a product and tech point of view. They’re fully embracing it.

Really well. We’re trying to capture a much larger share of wallet than we have in the past.

In the international business, our upfront schedule is slightly different than the United States. But I hear from the US sellers that the response has been, “Why haven’t you done this in prior years?”

What do you sell in the upfront?

Everything. Custom sponsorships typically require longer lead times, so upfronts is a really good way to do it. But we sell video ads as well.

How do you deal with fragmentation among TV and digital ad buyers at the agencies?

It’s getting much better. OTT advertising is not that old. That shift in budgets is happening because organizationally at the agency, it’s a much bigger focus. Having said that, there’s still a lot of room for improvement.

Outside of the United States there’s way more room for improvement. You might have a conversation with a TV or digital buyer and they won’t even know who the OTT point of contact is.

How does the OTT market differ internationally?

Everything in the United States is more adopted, generally speaking. But it’s growing at a much faster rate.

How does your rev-share model work with content providers?

It varies by channel, and we don’t disclose within each. Inventory splits is the more traditional way, but there’s other rev-share [models], like fixed CPM buys [where we] take margins.

The point of buying through Roku is that we aggregate channel inventory, so there’s little to no conflict. We’re not in direct competition with channels who might be selling their own inventory. That’s really good for the channel, and it’s good for advertisers.

Will it be more difficult to ink rev-share deals as more content providers launch their own streaming services?

We don’t produce content, so we like when ABC, NBC, Disney and Apple look to us to distribute. We can’t talk about future stuff they’re working on. Our primary objective is [delivering] amazing content to consumers on our platform.

How much of your ad revenue comes from The Roku Channel?

We don’t break out spend on any channel, but the Roku Channel is important for us. It provides our O&O inventory on premium content. It’s an amazing customer experience because it’s free. We have live streams now and we’re working on other products as well. It’s the fastest growing channel in the platform’s history.

A lot of OTT channels have really bad frequency capping issues. How does Roku solve for that?

We’re not in the business of driving down CPMs at the expense of an amazing customer experience. That means reducing ad loads.

For frequency cap management especially, we’re really strict. We work with our channels to embed a piece of code so the inventory they sell is not bumping up against the inventory we sell. On Roku TVs, we can use ACR on linear to not serve the same ad if they move back to OTT.

How can Roku continue to differentiate as the OTT market gets more crowded?