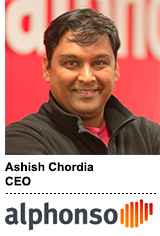 Although companies such as Alphonso TV, Samba TV, Sorenson Media, iSpot.TV and Gracenote have been around for a while, they’re finally able to capitalize on an ecosystem that’s ready for their technology – even as consumer privacy concerns grow.

Many of these companies seem to do similar things: use connected TV or over-the-top (OTT) viewing data to power advertising. But there are nuances in how they do it and what exactly they do.

For Alphonso, it’s about TV-to-digital retargeting and data licensing.

It knows which ads are running where, because its crawlers scan the networks, and it knows who’s watching what, because Alphonso’s tech is baked into various smart TVs and set-top boxes.

Its retargeting business is powered by an exclusive deal with the demand-side platform Tremor and through APIs with social media networks like Twitter. It’s also working on a partnership with Snapchat.

AdExchanger: Whose responsibility is it to provide the opt-ins? Yours or the device manufacturer?

ASHISH CHORDIA: The opt-in is presented by the hardware guys but approved by Alphonso. We have so much skin in the game, we cannot let someone else make a mistake here.

Which smart TV devices are you in right now?

What percentage of smart TVs have Alphonso’s technology in them?

We do license data from some companies where they’re running technology, but it’s not our technology. There is one large OEM – which is not Vizio, it’s not Inscape – that we license the data from.

So, between the TV data that we license from this one brand and a few other brands that run our technology, in terms of TV market share running our ACR technology, we are the second-largest in terms of number of units. Samsung being the largest.

Samsung is, from what I know, the largest smart TV OEM that doesn’t sell data. Combined, our scale is second to Samsung. The largest after that is Vizio, which has about 8 million smart TVs.

You mentioned you’re not using data from Vizio or its data-selling unit, Inscape. Are advertisers buying from it, after its FTC settlement?

We used to partner with them, and we don’t partner with them now. And it’s entirely possible we’ll partner with them again. So, I am very optimistic about their data sets and what they’re bringing to market. We compete at some level, but we also collaborate. I don’t see this as a zero-sum game, and I think the data set is very good. And I think after their debacle in 2016, they fixed their privacy policy, so I don’t think brands should be scared of working with them.

What do device manufacturers get in return for embedding Alphonso’s tech?

We are basically chipping away at the cost accretion of the hardware OEM.

Everybody makes good plasma, and the prices are dropping dramatically on devices, so what Alphonso brings to the table is a technology set that makes smart TV really smart.

The OEMs also make money. As we make money on the data, we share from some of that with the OEMs as well.

Is there a risk to your business model? Do you worry the OEMs will treat you the way Facebook treated some of its partners: copy what you guys are doing and then block you out?

Yeah, so, that’s a very good analogy. Facebook is very different from hardware OEMs, most of which are actually not good at software and services. What they are good at is marketing, building big brands, distribution channels and plasma. A lot of OEMs don’t build their own operating system for TV and don’t write the apps on the TV themselves. They’re essentially packaging this from others.

This is why Roku is so successful. Roku is amazingly successful at building TV operating systems, working with a new set of hardware OEMs because those hardware OEMs don’t have the capability to build the content integration, aggregation and the software services needed.

Speaking of Roku, what is your relationship like? Do you get Roku data?

We don’t have a direct relationship with Roku. In terms of positioning, Roku is increasingly doing really good business in advertising. They started out from just aggregating publisher inventory and building that. And they have implemented Alphonso-like features with Alphonso-like technology not driven by us.

Can you talk a little bit about the competitive landscape?

It is my understanding that Sorenson is primarily focused on creating inventory on the fourth screen by embedding software into the mix so that they can create ads dynamically on the TV itself.

They want everybody to know that they can do dynamic ad insertions with a lot of broadcasters.

Samba TV has built technology similar to Alphonso’s. They collect TV data from Sony and some other brands. They seem to be going after the media use case much more than anyone else. They are running media at a very large scale, or at least a good scale for a company of that size. And they continue to do more of that.

Alphonso, slightly differently, licenses our data for the media use cases, but we’re not really running the media itself. We’re not an ad network.

And then, of course, we can’t forget Gracenote, which is a company that Nielsen bought.

Yes. We have always been profitable as a company. We raised very little capital compared to our peer group here: Sorenson, Samba, iSpot.

What’s the end game for you? Do you remain independent or get acquired? If you get acquired, who would be the ideal acquirer?

I believe that a good founder should not have exit strategies. They just happen because they happen, and if someone comes knocking with a big number, a smart founder is going to pay attention to that.