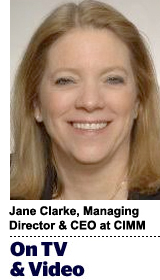 Today’s column is written by Jane Clarke, managing director and CEO at the Coalition for Innovative Media Measurement (CIMM).

Wouldn't it be nice to have one TV platform for advertisers to use that competes with Google and Facebook?

While it would simplify things, it’s clear that it isn’t in the cards, at least not in the short term. Today, both the sell side (media and distribution firms) and the buy side (media agencies) are watching as addressable TV providers and OEMs in the video-on-demand (VOD) and data-driven linear TV space create different platforms, forcing marketers to find a way to scale and harmonize them.

While having a single platform may be a pipe dream, this growing group of providers must work together to address operational issues for addressable TV to scale and streamline for national advertisers.

Standardization should happen earlier rather than later

While the different platforms may shy away from collaboration, there is no question that standardization is something that addressable TV providers must partner on. Standardizing data sources across addressable platforms and other forms of TV and video, such as linear, data-driven linear, VOD and connected TV (CTV) needs to be the primary goal for the industry to seamlessly implement addressable TV. Standardization of consumer targets and data sources across networks will streamline and scale the process for advertisers and media agencies.

As MVPDs (pay TV operators) evolve their partnerships with Ampersand and Xandr, it remains to be seen how they will approach standardization to enable, for example, national advertisers and their agencies to find the same segment across providers and ensure that the impressions are being counted in the same way. OpenAP provides part of the solution, but it isn’t ubiquitous.

The good news is that, aside from MVPDs potentially adding more national inventory, addressable inventory will be expanding thanks to the foray of smart TVs entering the world of addressable TV. Commercial overlays appearing on smart TV sets within national network TV inventory is the next potential source to scale addressable ads, beyond what can be provided by MVPD platforms.

Two organizations, Project OAR and Nielsen, are developing smart TV systems for addressable placement on national TV networks. Both organizations are testing technology to dynamically insert an ad at the device level (smart TV). Can all these approaches coexist or will it be too complex for marketers to buy?

Contractual agreements between TV networks, MVPDs and smart TV manufacturers must still be put in place. We don’t yet know what these business terms will look like but I’m hearing from the national networks that they see addressable TV via MPVDs and original equipment manufacturers (OEMs) as complementary from a business stance.

So, it’s likely that MPVDs will handle addressable national network inventory within the pay TV footprint (and own the set-top box relationship as a business rule), while OEMs can handle addressability to non-pay TV homes but also to MVPD homes not yet enabled for addressability. But it remains to be seen how this will all work in practice.

National networks are still grappling to understand the requirements and implications related to opening up their inventory to addressability. TV networks are still developing profitable addressable pricing models that increase per-capita inventory revenue while also providing advertisers a material discount in effective target CPMs. At a glance, it shows how far we have yet to go.

Layered onto fees from networks am I also going to pay the MPVD or Canoe or a company like Nielsen or OAR a tech tax? If so, I’m curious to see how they will all price their respective packages.

And, how will the tech costs from OAR or Nielsen affect the manufacturer’s decision to incorporate dynamic ad insertion technology into their television sets? The OEMs focus on producing affordable, low-cost products, and it is known that the margins on the sale of television sets are incredibly small. While OEMs will view addressability solutions as a new revenue stream, I don’t foresee decision-makers at OEMs being willing to pay a premium to buy and integrate addressable tech into their products.

Like any sound business, OEMs are only likely to include the needed technology within their TV hardware or software if the cost to do so is nominal, the process is turnkey and there is upside revenue potential.

While many business issues are still up in the air, advertisers are pushing addressability forward. Marketers are even expanding addressable tactics beyond granular precision targeting to encompass more advanced placement approaches, such as frequency capping and targeting across consumer subsegments and devices.

While it’s clear that we aren’t likely to get an easy, single addressable TV platform, those that wade through the complexity of our current landscape say it’s workable. Yes, it’s an arduous process of reviewing and using TV viewing and consumer data sets from across many disparate sources, but those I’ve spoken with contend the payoff is worth the effort.