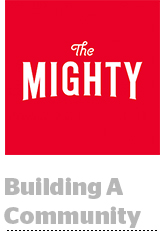 As anyone who’s ever consulted “Dr. Google” for a medical condition knows, the Internet can be an incredibly helpful place to find health information. But once people find their answer on WebMD, where can they go next?

People with long-term medical issues want support from others dealing with their conditions, not just definitions. The Mighty taps into that communal need by creating a Facebook-style social network for people living with disease.

Almost four years after its founding, membership is taking off. The Mighty’s membership tops 2.5 million, and it’s gaining a new member every 20 seconds. It aims to attract 10 million members by the end of next year.

Anyone can view The Mighty’s content, and it encourages membership so readers can participate and curate their experiences. The launch of an iOS  app this fall, for example, doubled the number of conversations on the platform within a four-week span between September and October.

Founder and CEO Mike Porath started The Mighty to create the community he wished he’d had after his daughter was born with a rare disease.

“A lot of the health content is a definition of a disorder or disease. You use it once and that’s it. What was missing was all the day-to-day stuff,” Porath said.

It was most helpful for his wife and him to read stories about parents living with this condition, but he could find only a few online, with no way to contact the authors or others reading the same story.

The Mighty started by fully curating the content. Authors edited stories about people living with diseases. That approach drew on Porath’s strengths as a former journalist, but the team couldn’t keep up with demand.

“When we started asking people to share their stories with us, we were flooded with how many people wanted to share,” Porath recalled. “We had limited resources and had to say no to people.”

That was one of the biggest mistakes he’s ever made. The Mighty needed a more social network-style approach, which made readers happier and turbo-charged growth. “Now people can post a thought, ask a question,” Porath said. “They don’t have to write a 500-word story. In retrospect, I wish I’d made that change faster.”

Young, successful companies often grow users faster than revenue, but The Mighty’s monetization is also accelerating. Its Q4 revenue will be double to triple its Q3, according to internal projections. Venture capital funds its growth: The Mighty collected $2.5 million in seed funding in 2017 and raised an $8.2 million Series A round in October 2017, which was led by GGV Capital and included investment from WPP.

“The reason we went down the venture-backed route is because we wanted to reach as many people as we can,” Porath said.

“The health vertical has the highest ad rates of any vertical by a long shot,” Porath said. “But, we also saw an opportunity to do something different.”

The Mighty focuses on content marketing and insights. Pharmaceutical companies, insurers and researchers, for example, can learn from how the community talks about their conditions.

“We are working with a client in the cancer space,” Porath said. “The people who follow any kind of cancer on the site, 80% of them also follow anxiety or depression. And the highest-performing content were themes like the loneliness of cancer. We can tell them this is what people are dealing with and how to talk to them to be helpful.”

The Mighty’s biggest clients’ advertising budgets hover in the $500,000 range.

Some clients only want insights, while others turn those insights into content marketing efforts on The Mighty or elsewhere. The Mighty also touts its expertise in using a voice patients understand and relate to. A video sponsored by biotech company Ovid Therapeutics and posted on Facebook, for example, featured a mom talking about her experience raising a child with a life-threatening form of epilepsy.

The Mighty has helped companies recruit for clinical trials and hone their marketing message to address common fears and questions about such trials, which could be as simple as concerns about related travel.

Feed-style ads do appear – like a shopping ad for weighted blankets in the anxiety section – but advertising won’t be the only way The Mighty makes money. “The big picture opportunities are outside advertising,” Porath said.

An insurance company could work with The Mighty to encourage their insured members to use the social network, for example, with the goal of helping them improve their health while decreasing medical costs.

“This is exponentially larger than an ad campaign.”

As The Mighty explores ways to make money in and out of advertising, it’s focusing on building a membership to reflect those needs. Depth of engagement, not breadth, is most important.

People learn about The Mighty from the 300-plus nonprofits, hospitals and health care organizations it works with, word-of-mouth and publications where it posts articles, such as HuffPost.

New members are encouraged to participate and check in frequently. Email newsletters work well for The Mighty, which sends more than 25 million monthly email newsletters.

Members can personalize content. The Mighty created more than 600 health topics, and most people follow three or four conditions. The Mighty now uses hashtags people can follow, ballooning the number of topics to more than 10,000.

On social media, it has created more than 45 Facebook groups for different conditions. Active communities can be small for rare conditions or much larger for more common conditions like anxiety, which has 576,000 followers.

With a growing membership that’s sharing such sensitive and personal information, The Mighty knows it possesses powerful data.

As it explores how to use its data and what kind of ad experience makes sense for its members, The Mighty is proceeding cautiously.

“We have seen where other social networks have created problems for themselves,” Porath said. “The most important thing is maintaining the trust of our community and being transparent about what we do.”