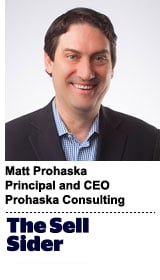 “It’s a lot harder to make the same amount we made last year.”

“We used to make a comfortable living and now find it difficult just to get by.”

“It seems like the rules of the game are rigged against us.”

While these quotes sound like they could be coming from many families in America today, I heard them come from American digital publishers over the last year. And more than half the publishers my colleagues and I met with at CES last week are struggling to compete in today’s digital ad economy.

It seems there are some parallels to be drawn with challenges facing many publishers today. This column is not meant to delve into the socioeconomic struggles of millions of Americans or be a political thought piece worthy of a letter to the editor of The New York Times, The Wall Street Journal or The Economist. I am not qualified to write it.

But it does seem like there is an uphill struggle taking place with many that would find themselves in the middle, economically, or by rank of advertising revenue among US publishers.

I grew up with my sister in a middle-class home in Western New York as the proud son of a schoolteacher and choir director. We didn’t expect to strike it rich, but we were taught that with hard work, we could not just survive but thrive. There are thousands of hard-working, passionate employees thinking the same as they produce, design, develop, sell and operate for their publisher employers.

Similar to the US economy, everything looked pretty rosy in the digital advertising economy up until about a couple months ago when viewed at a macro level: Total unemployment is low, GDP growth is solid, and total US digital advertising spending grew to nearly $50 billion in the first half of 2018.

But look a little beneath the surface of each stat and you will see that not nearly everyone’s boat is being lifted from the overall rising tide. Strip out the top 1% and in both cases, total growth is virtually nonexistent for everyone else. Plenty of great publishers producing quality original content and generating unique audiences are having a hard time growing at all.

If the charts weren’t labeled, would it be easy to tell which is which?

We don’t see this as much on the brand side – the direct-to-consumer movement has helped relatively new brands such as Harry’s, Peloton, Casper and dozens of others across many categories challenge the established in real disruptive ways. But their dollars and spend from thousands of other national and local brands are not even close to being evenly distributed.

Part of the challenge is that we have unfair attribution modeling taking place still from most marketers. Remember when we went about 10 to 12 years calling this “The Year of Mobile?” Well, I’d like to start a new streak and call 2019 “The Year of Attribution” – in the first of at least five needed years. Too many marketers are still using last impression, last click as their primary means of assigning credit to sales, leads or even brand lift. And because plenty of media channels are still nondigital, we have segregated methodologies, giving more credit to those that can best track specific cause and effect.

Most of the objective third-party attribution modeling companies have been acquired by the top five publishers and platforms, and data walled gardens have hampered their ability to understand what consumers do across properties. Last week’s news coming from Los Angeles that The Weather Channel fails to provide users with enough disclosure about its data practices and the subsequent pullbacks from major telcos removing location tracking may ease some consumers’ worst fears of tracking. But it also starts a trend of removing a tool that many publishers use to help advertisers understand their consumers better.

We will see how long it is, if ever, before the top three publishers and platforms turn off tracking and selling of their rich location data.

Until we have a true level playing field and score being kept the same way for all publishers across all media, the “wage” gap among top three publishers and everyone else will continue to expand. Attribution is clearly not the only answer. Publishers must also improve their audience development beyond using the “necessary evils” of social platforms for promotion and content placements, develop real first-party deterministic audience assets and recognize that only monetizing programmatically in the open auction does not make a complete sales strategy.

Like other moments in world history when the gap got so large that revolts occurred, perhaps there will be some kind of revolution, or regulation, to help reverse this unsettling trend.