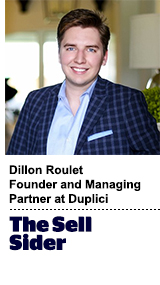 Today’s column is written by Dillon Roulet, founder and managing partner at Duplici.

The effects of a matured ecosystem are clear: Open marketplace media buys are much more secure and transparent than they were in the early days.

We’re a few months into the new year and preparing to say goodbye to private auctions. Seems to be the talk of the town. But within this chatter, I’ve noticed a concerning game of telephone at play. The term private auction is being confused with private marketplace.

Let’s be clear: Private marketplaces (PMPs) are far from being in decline or diminished in importance. These sell-side marketplaces have spent years cultivating relationships with communities of specialty media, most of which don’t sell inventory on the open exchange.

They were initially conceived as collectives between agencies and publishers, but have evolved to become much more influential with the publishing communities they serve. They now stand as the gateway for marketers looking to tap into the power of unique, highly contextual media audiences and show no signs of going anywhere but up.

Private marketplace is not a general label for any media buying or selling outside of the normal parameters of the open exchange. Open RTB and private auctions should not be confused with opportunities for specialized, supply-side-created marketplaces/networks or programmatic direct.

I’ve heard buyers commonly ask publishers for a private marketplace when the intent is simply a programmatic-direct engagement. They’re essentially only using the programmatic pipes for campaign activation with fixed pricing and guaranteed budget. Programmatic-direct campaigns are completely different than private auctions, where a buyer intends to activate with carefully selected publisher relationships and individual impressions.

On the other hand, private marketplaces are collectives of media brands with common contextual environments and quality standards, usually managed by an independent ad network or committee. Demand for these PMPs is often driven independent of the publisher sales. PMPs’ primary task is to provide high quality, exclusive inventory for buyers, while maintaining higher CPMs and campaign safety for the publishers they serve.

For many small publishers, the open market is not an option

Most small publishers still get beat up on the open market. That’s why they’ve turned to trusted private exchanges that have helped solve their primary challenge of scalability.

After the dot-com boom, large publishers were offering digital inventory via DoubleClick, Right Media, 24/7 and other open networks, but the niche media community faced a historic dilemma: plug into an open ecosystem focused more on scalability than quality, or minimize digital exposure and continue to support a still-profitable circulation business.

As we now know, many chose the latter. Unfortunately, by the mid to late 2000s, the publishers that were left standing were clinging for dear life.

That’s where the value of private marketplaces came into play. The ad networks that facilitated the first PMPs offered struggling publishers not just the ability to catch up with digital transformation, but the chance to jump one step further into the industry’s newest, most efficient strategy: programmatic.

Of course, this was almost a decade ago. Times have changed and needs have shifted.

The role of PMPs has continued to expand

This small community of private ad networks gradually evolved into the private marketplaces in place today. But they’re also continuing to expand their role with the publishers they serve. They’ve become holistic advisors to the entirety of their publishers’ digital and tech strategies. And because of this role, they frequently act as the gatekeeper to all ad ops, data and supply chain initiatives their members adopt.

It’s important to also note that the size of these networks can be deceiving. A member publisher may only generate on average between 1 million and 2 million monthly impressions. Yet it wouldn’t be unusual for the respective PMP to collectively offer scalability of more than 100 million monthly impressions. They can swing a surprisingly big stick when it comes to reach.

PMPs also can offer buyers opportunity in a world without cookies or universal ad IDs. It’s likely that CPMs on the open market will take a nose dive if the cookie retires before we can onboard a viable universal ID (don’t hold your breath). Publishers of all sizes should be shaking in their boots. And once CPMs start to drop, those dependent on open exchanges will be scrambling for new alternative revenue streams.

This is great news for PMPs, as it’s likely that an influx of publishers will seek to wall up their inventory as fast as possible to maintain premium pricing. Furthermore, it’s likely that existing private auctions will weather the storm with minimal economic impact. In this scenario, buyers and agencies will have little choice but to continue to use private deals.

The gatekeepers of first-party data

Powering intelligent media buys post-cookie is going to demand high quality first-party data. As I mentioned, many private exchanges evolved to manage a majority scope of their members’ digital strategy. This includes their additional role as trusted data custodian. It’s quite common, particularly in B2B media networks, for PMPs to influence or outright manage the entire supply chain connecting their publishers’ data to the exchange.

Furthermore, AI-powered customer data platforms are quickly emerging to help publishers organize and leverage their data with unprecedented efficiency. Coupled with a user-ID void, this means that first-party data will inevitably become the barometer of media valuation. And the private marketplace stands as the gatekeeper of this data-rich inventory.

Long term, PMPs will continue to secure trust and wield significant clout with the close-knit publisher communities they serve. And they’ll live on to offer viable solutions for buyers in coming times of turmoil.