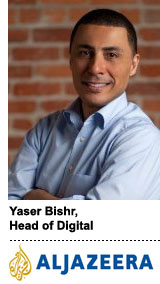 When Al Jazeera pulled its cable channel from the American market a few years ago, it saw one bright spot: social media.

While the cable channel failed, Al Jazeera saw promise in AJ+, its social media arm focused on Facebook and YouTube distribution. The brand operates with a more youthful vibe, taking a personal tone that appeals to millennials. The English-language page has attracted 10 million followers.

But now Al Jazeera is getting impatient with those social media platforms.

“We had very good success with Facebook, but then you hit a wall,” said Al Jazeera’s head of digital, Yaser Bishr. “You’re a slave to the algorithm.”

“You can’t scale with that broken model,” Bishr said. “Publishers are operating in a sweatshop. They take the brunt of producing content. But who makes the money? The storefronts. That is not a sustainable model.”

YouTube, where it saw early success, is also waning in popularity.

“Creating a successful channel on YouTube these days is very hard,” Bishr said. “They are leaning more long-form. It’s not the right platform for news; it’s more about shows and personalities.”

Al Jazeera has also been disappointed by Snapchat, the new kid on the block that agreed to block Al Jazeera’s content in two countries.

“Snapchat received a letter from the Saudi and the United Arab Emirates governments asking them to geoblock Snapchat Discover. To our surprise, Snapchat agreed to it, and they blocked us,” Bishr said.

So, Al Jazeera put more effort into its Arabic Instagram account “because it’s owned by Facebook and they have rejected requests from governments in the Middle East to shut down,” Bishr said.

As these social media platforms offer less and less to Al Jazeera, the publisher is switching focus and building out its own platforms. AJ+, for example, is getting its own website, and this month, Al Jazeera launched its podcast network, Jetty.

“We want to create different formats of content that I can give to the same audience at different times of the day. And we want to build our own platform,” Bishr said. “That’s how you build loyalty.”

Bishr, who leads Al Jazeera’s 600-person digital division, talked to AdExchanger about the news broadcaster’s plans to refocus on the US market.

AdExchanger: What’s different about how you’re approaching the American market this time around?

YASER BISHR: Previously, all the websites were part of the TV channels. Now we have our own newsrooms. It’s not integrated, so we own our own destiny.

AJ + was designed from the ground up to target the millennials, around issues that matter to them. Seventy percent of the audience is in the US.

What role do social media platforms play in the future of AJ+?

All the data we have seen shows that Facebook is not a good platform to build loyalty and have people come return. We will do videos that go viral, but it is not a platform that makes the person say, “Let me check out AJ+ today.”

When you do the story about the shooting in Texas, there is a deeper story behind it in terms of gun control in the US and other mass shootings. There is context you need to provide, and you can’t do that on Facebook.

Facebook has a fake news problem. What’s it like to distribute content on platforms filled with fake news – as well as being a foreign news source in a space where foreign governments funded fake news?

With TV, you see a newscast, there is a break for advertising and then the newscast comes back. With Facebook news feed, targeted ads are mixed up with content from my friends, AJ+ and fake news. Most people don’t pay attention to where news is coming from. Tech-savvy people can find the difference. But Joe visiting the website, not really paying attention, sees “The pope endorsed Trump.”

There is no incentive right now in my view for Facebook to take action and solve the problem. All they worry about is traffic.

What’s Facebook’s responsibility in this scenario?

In our view, Facebook and Google need to man up and take the matter into their own hands. Otherwise, Congress will interfere. They are looking into regulating Facebook.

It’s not like I’m in favor of regulations. I think the private sector is better at taking care of itself. But they need to figure it out. They look at it as a computer science problem. It’s not. It’s a political problem. You need a mechanism to ensure you know if content is trusted or untrusted.

How are you trying to grow the AJ+ audience given these issues?

If we want to continue to grow the audience, we have to go outside the Facebook platform. The measure for me [of audience growth] is not views. Facebook considers three seconds a view. If that’s a two-minute video, I’m not happy. I’m looking for how long I can keep them on my content, because this is a measure of loyalty.

On Facebook, we are relying more on organic audience growth for AJ+. I refuse to spend significant money on pushing content. It doesn’t make sense to put our money back to gain more audience reach.

How do you measure your total audience?

I need to create the plumbing and infrastructure to be able to answer that question. Right now, we don’t have a single platform dashboard that can give me a view of the total views across all the platforms. We do that manually every four to six weeks.  We have 10 or 11 content management systems (CMS). That’s a problem.

We are moving to a single CMS, and we are putting together a data analytics team and embedding data scientists with our people in the newsroom.

We don’t want to make the same mistakes [as others did]. The current model of advertising, the shared revenue with Facebook and Google, is broken.

There is a reason why newsrooms in the US are shrinking. They can’t make enough money to cover the cost of newsgathering and broadcasting on social media platforms, because the marginal cost of producing a video is high. You have to hire people to create a video and give them tools and resources.

For us to scale and increase views, so we can make more money from programmatic ads, is expensive. For Facebook, it’s not. We can’t reach that economy of scale as a publisher.

It’s a good thing we are not for profit; we are more like BBC. We would like to offset some of the cost and reach a wider audience. If we are ever going to have break-even, in terms of continuing to have people on the ground to provide original content and sustain 80 bureaus around the world, you need to have significant revenue. You can’t get that with the current model.

What is Al Jazeera doing with programmatic?

At the end of the day, everything is moving to programmatic, even premium advertising. We are putting together a programmatic team and just hired someone from MediaMath.

I’m conscious about respecting our audience. There is a reason why ad blocking is on the rise. We as publishers should take the blame. We bombarded the audience with ads and forced the audience to install ad blockers. Now you have to pause ad blockers to watch content. The model is broken.