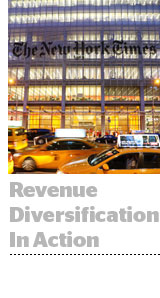 Two forces are preventing the Times from growing advertising, CEO Mark Thompson said. They won’t surprise anyone in digital media.

First, major digital platforms are taking all the growth in the advertising market, he said.

Second, the shift from direct-sold ads to programmatic ones have negatively affected the advertising growth of premium publishers like the Times.

Nevertheless, the Times’ compounded annual growth rate of 7% in advertising over the past few years has outperformed the market overall, he added. A focus on branded content, custom marketing services and podcasting has helped it find growth in a tough advertising market.

These challenges in the advertising market only reinforce the validity of the Times’ subscription-first approach, Thompson told investors. He said the publisher will always choose a good user experience for subscribers, making it sensitive to bad ad experiences. Case in point: Last week, the Times stopped selling open programmatic ads in its mobile app, making good on a pledge made in November.

Going forward, the Times expects even lower advertising growth than its 7% average. The Times will return to year-over-year revenue growth by the second half of 2020, but it won’t reach the previous 7% growth number.

Machine learning in the marketing funnel

The New York Times added 342,000 digital-only subscriptions in Q4. With end-of-year holiday cooking, the Cooking app added 68,00 new subscriptions. And 232,000 of the new Q4 subscribers signed up for the core digital news product, an increase of 35% over the prior year.

A new approach to marketing driven by speed and machine learning helped the Times add more than 1 million new digital subscribers over the course of 2019.

The Times uses tech that allows it to continually optimize its digital subscription business by running dozens of parallel tests simultaneously. As the Times experiments with pricing increases over the coming year, it expects that this tech will help it raise prices without increasing churn significantly, since it can uses these tests to gauge consumer price sensitivity. Some readers may need to deepen their engagement with the content first, for example, and then feel the value of a price increase.

Growing the top of the marketing funnel by requiring people to register in order to read content also helped the Times increase subscribers in 2019. The approach added “millions” of email addresses to its marketing pool.