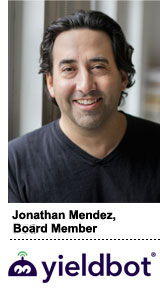 Yieldbot founder and CEO Jonathan Mendez has vacated that role.

“Jonathan and the board came to a mutual understanding,” a company spokesperson confirmed to AdExchanger on Friday.

The change was effective in early October, but Mendez is keeping his board seat.

Yieldbot has had a tough year. It laid off a third of its staff and had trouble making on-time payments to publishers, requiring it to receive an emergency $3 million cash infusion and a $15 million loan from investors.

The company’s insertion order-based business has been stressed as brands shift budgets to programmatic. Plus, Yieldbot’s business put it in competition with agency trading desks – a battle it lost.

It was a swift fall: When the company raised its Series C the prior year, Mendez said the company had turned a profit.

Mendez spoke of those troubles to AdExchanger just a month before he left his CEO position. At the time, he said the company’s strategy was to focus on its newer shopper marketing business and away from competing for display dollars.

“Our board and executive team felt that what we do best is drive people to make a purchase, because our software and data focuses on consumer intent,” Mendez said.

At the time, Mendez also acknowledged placing one wrong bet. The company invested in a proprietary header bidding wrapper, PubFood, and raised millions to develop it. But the product was sidelined as open-source Prebid gained wide adoption.

There is no timeline yet for replacing Mendez, according to the company spokesperson.

No other layoffs coincided with Mendez leaving.