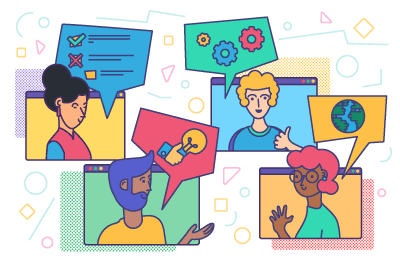 The structure of the World Wide Web Consortium can be confusing, since thousands of technologists across hundreds of companies participate in hundreds of groups, all with very specific purposes and remits.

There are four broad types of groups that exist within the W3C – interest groups, business groups, community groups and working groups – each of which has a different function.

Over the past six months, since Google made public its plans to phase out third-party cookies by 2020, numerous ad tech companies have joined the W3C for the first time, and they’re still getting their sea legs.

Here’s a quick cheat sheet that breaks down the main differences between the various W3C groups.

Community groups, of which there are 336, are proposed by members of the public and open to anyone who wants to share their ideas for possible future standardization. There’s no cost associated with creating Community Groups, they’re free to join and W3C membership is not required in order to participate.

Primarily, Community Groups serve as a forum to encourage structured debate, and most of the groups are focused on very specific topics, such as creating better data interoperability in the auto industry or creating a unified model for data visualization. These groups do not produce standards or other formal documents.

Business Groups are similar to Community Groups, but participants, which are mainly companies represented by technologists, have to pay to join. It’s a place for these companies to share ideas, provide input on proposed standards and learn about how W3C technologies can be applied to commercial or business problems.

One example of a Business Group of note for the ad tech community is the Improving Web Advertising Business Group. This is the group that Google directed ad tech companies to join in January as a venue for providing feedback on and contributing to Chrome’s Privacy Sandbox proposals.

The primary goal of an Interest Group is to bring together people who wish to evaluate potential web technologies and proposals. It’s a place to exchange ideas. These groups do not publish their own recommendations.

The creation of Interest Groups needs to be voted on by W3C membership and by the consortium’s Advisory Committee. One such group currently undergoing that process is the proposed Decentralized Web Interest Group, whose aim would be to help suss out the unintended consequences of potential web standards before they’re actually developed and deployed.

Working groups are where, well, the work gets done, and they’re integral to the W3C process for developing web standards.

They typically produce deliverables, such as standards track technical reports, software and test suites. Members also review the deliverables and documents created by other groups.

How a bill becomes a law

But how does a standard actually come into being through this labyrinthian structure?

The W3C is a consensus-building body whose purpose is to get stakeholders and competitors together in the same room to, hopefully, work together and compromise on common standards for the web. Click here for a more detailed description of the process.

So the W3C can’t and won’t prevent a browser company or any other company from deploying a piece of technology.

Anyone can propose an idea, from the biggest browser vendor to the smallest startup, that is circulated and discussed via GitHub, mailing lists or even face to face (when people used to do that sort of thing).

The idea is then fleshed out into a working draft of a spec that’s distributed and debated across the various W3C groups. The draft is honed and revised and comments come in until it’s polished and ready to become what’s known as a candidate recommendation.

Browsers actively test candidate recommendation specs and provide feedback on how they’re working. This is followed by another comment period.

After addressing any issues, the spec is ready to become a proposed recommendation which is sent to the W3C Advisory Committee for review. If it’s approved, then there you have it folks: A usable web standard is born.

But it’s a time-consuming and highly-structured process. You can’t skip any steps. So, when’s that Chrome third-party cookie deadline again?