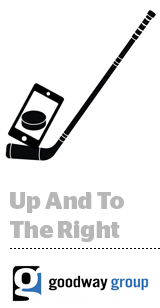 Mobile programmatic pricing is about to have its hockey stick moment, set to grow more than 45% by 2019, according to a projection released by programmatic agency Goodway Group on Tuesday.

Mobile prices will increase incrementally, just under 4% month over month throughout the coming year, including for mobile display and mobile video ads served in-app and via mobile browsers.

By contrast, desktop display ad prices are beginning to level off, with a tame increase expected somewhere between 1% and 3% for the year.

Goodway analyzed billions of bids and average CPM pricing on a weekly basis in the US from January through September across more than 10,000 campaigns.

The findings align with a recent forecast from eMarketer predicting that almost 80% of programmatic ad spend will go mobile by 2019.

At first, Goodway Group COO Jay Friedman was surprised by the mobile’s dizzying price increase, but it’s not so crazy if you think about the baseline.

“Mobile inventory itself is not necessarily so expensive,” Friedman said. “What’s driving the prices is the ability to refine that inventory more accurately based on things like location.”

Although mobile supply still exceeds demand on “a broad open-market basis,” Friedman said, as advertisers and agencies get more sophisticated with their mobile buying and start layering on targeting signals, supply will constrict and prices will go up.

The ability to target more precisely based on cross-device identity could also nudge mobile inventory prices higher, especially as connected TVs enter the device mix, attracting CPG marketers and others looking to do more with attribution.

Most advertisers would pay more to target a user in their first-party segment, for example, but that price should also take environment, device type and other components into consideration.

“There’s a wide band of pricing, even within what we think of as our most valuable indicator,” Friedman said.

Combinatorial bidding is a growing trend, Friedman said, though only a few platforms like AppNexus and The Trade Desk offer it today.

“It’s a quantum leap in terms of targeting abilities,” he said. “The mass market may not start to take advantage in 2018, but it’s starting to pick up and it’s worth knowing about."