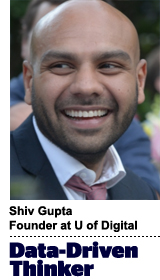 Conventional wisdom nowadays advises marketers to run as far away from black-box ad tech companies as possible. If a sales rep tries to dance around questions of transparency, they’re probably up to no good and you’d better not work with them, right?

Well, maybe. But there is good reason for some of these companies to operate as they do, and there may actually be a ton of value in working with them. One, or possibly a few, could even emerge as unexpected winners in the ad tech wars.

When a marketer refuses to work with one of these companies, part of their reasoning usually goes like this: “They won’t disclose margins because they are taking too much. And because they are taking too much, their performance will not be up to par with DSPs, which take a lot less.” However, quite to the contrary, many non-disclosed ad tech companies, such as Criteo, Quantcast and Exponential, to name a few, have built reputations for driving fantastic performance. So what gives?

Let’s do some back-of-the-napkin math. Since a standard DSP, on average, charges somewhere between a 10-20% fee (the pricing section of the AdProfs DSP guide backs this up), let’s go with 15%. The typical black-box ad tech company generates anywhere between a 30-50% margin (as a point of reference, Criteo’s margin in its last earnings report was about 42%), so let’s go with 40%. Assuming that black-box companies win their fair share of performance battles, that would mean that they regularly overcome their significant margin disadvantage to outperform DSPs. And if that were the case, using these numbers, the black box would outperform the DSP on conversion rate by at least 22%. Here’s how the math breaks down:

This math directly addresses the common industry question: “How is <insert black-box ad tech company here> still in business?” In many cases, they drive better performance for marketers, which in turn fuels strong margins, which in turn allows them to reinvest in their business and keep putting out a winning performance product. And that’s exactly what they’re out there selling: performance.

Now if these black-box companies continue to win performance battles, how have DSPs managed to thrive? Because they’re selling transparency. That’s where they’ve invested their time and resources, and for good reason. There is a deep mistrust between buyers and sellers, sown over time by numerous events. There was the infamous ANA report. There were ad networks making absurd margins without providing much real value. There are continuing ad fraud scandals, many of which subtly implicate media and ad tech providers who conveniently turn a blind eye.

Time and time again, marketers have been duped by questionable technology and business practices, so transparency has become a basic requirement of partnership, and performance has almost become secondary. This is why you’ve seen the rise of the transparent DSP and the (slow) decline of black-box ad tech.

All of this inevitably leads to the question: Why don’t black-box companies just offer margin transparency and become a best-of-both-worlds solution? Because disclosing margin would open the door to fee negotiation. That would unwillingly enter them into a DSP price war, despite their model and value proposition being inherently different than a DSP’s. Compromising margin would derail their financial model and, consequently, the sustainability of their business. This is why they have stubbornly remained nontransparent. While this stubbornness has helped preserve their business model, it has also prevented them from growing, due to the aforementioned industry issues around trust.

The good news is there’s a better future ahead, in which buyers and sellers will trust each other again. Thanks to industry initiatives (such as TAG, ads.txt and OpenRTB SupplyChain object), independent policing and transparency tools (White Ops, IAS, DoubleVerify and Amino Payments, for example) and even law enforcement (check out this story about the DOJ’s recent crackdown on an intricate ad fraud scheme), we’re moving toward a world in which trust will somewhat be restored. And in this future, perhaps many marketers will have brought programmatic buying in house, based on the trends we’re seeing now. What does a marketer look for in a partner, in this new world? Transparency probably falls down the priority list a bit, in favor of ease of execution and, most importantly, performance.

So what does that mean for black-box ad tech?

Now, of course, it won’t be as simple as that, because transparency will still matter to a certain extent; too much damage has been done for trust to be entirely restored. These companies will have to walk the line of transparency, by artfully disclosing their margins while sticking to their guns and not entering into DSP-style fee negotiations. That may lead to some painful, short-term losses and will require fortitude. And they will probably need some – OK, a lot – of things to go their way. But those that are able to thread this needle have a very real shot of succeeding. Because they’ve built something that gives marketers what they value most: performance.

So next time a rep dances around the transparency issue, spend some time asking them more questions before ending the meeting. It might work out in your favor.