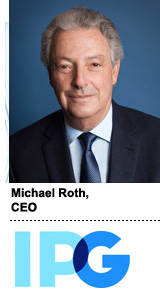 IPG is still outperforming its peers in a tough market for agencies.

That’s much better than Publicis, which saw organic growth at just 0.3% for the quarter and 0.1% for the year. IPG also outperformed Omnicom, which posted 3.6% in Q4 and 3.2% for the year. WPP has not reported earnings yet.

While clients in the healthcare vertical, which makes up 25% of IPG’s revenue, continue to perform strongly, IPG is also seeing a resurgence from consumer packaged goods. Financial services, auto and transportation have also seen improvements.

That’s a different story than Publicis, which blamed its weak growth for the year on cutbacks from CPG clients.

“We’re fortunate in having our clients in the consumer goods space, which frankly accounted for good growth for us year over year,” said IPG CEO Michael Roth on the earnings call.

While IPG reported client wins including Henckels and Quicken Loans at UM, the agency will cycle through the loss of major accounts in Q1, including the US Army, which Omnicom’s DDB won in December. A handful of IPG employees on those accounts will be laid off.

“When you lose a client, and unfortunately we did, the adjustment is in terms of layoffs and rightsizing the business,” Roth said. “As we bring new business on, we’re going to see an increase in temporary labor until we get full-time employees embedded in the organization.”

The results were the first IPG has reported with consolidated results from Acxiom, which it purchased for $2.3 billion last July. Acxiom’s results will not be included in IPG’s organic growth figure until Q4 2019, but IPG said the company brought in $181.7 million in revenue in 2018.

IPG expects revenue synergies between Acxiom and IPG to materialize by the end of the year.

“The transaction will be accretive,” he said, “but it will take some time to implement, make sure the integration is correct and products we are bringing to market are being brought at the right time with the right people in place.”

IPG is already pitching alongside Acxiom for clients who are asking IPG to “pressure test” its ability to link first-party data with external data stacks, Roth said. Acxiom will also help IPG navigate a world where data privacy and regulation are increasingly important.

“Strategically, the acquisition puts us ahead several years in our strategy around data and analytics,” he said.

As IPG grows its capabilities with data, it’s seeing opportunities to do more business transformation work. So it’s hiring more people with consulting backgrounds in its digital agencies, like Huge, R/GA, MRM//McCann and MullenLowe Profero.

“Our goal is not only to win the project part of that, but expand our relationships as a result,” Roth said.