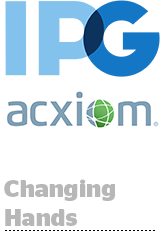 The RAMP Is Up

IPG now officially owns Acxiom Marketing Solutions and LiveRamp is $2.3 billion richer. The deal closed on Monday – and guess how former Acxiom (now current LiveRamp) CEO Scott Howe found out. “Michael Roth [the CEO of IPG] came up to me and said, ‘I just put a lot of money into your bank account – you’d better treat us right,’” Howe told AdExchanger. The deal is mutually beneficial, Howe said. Agencies like IPG are hungry for data chops and LiveRamp now has a lot of cash on hand to invest in its technology, partnership integrations and expansion into new verticals such as health care. Along with the close, LiveRamp began trading as a standalone stock under the ticker RAMP and announced its new leadership roster, which is pretty much the same slate of executives with shiny new titles. Warren Jenson stays on as president and CFO, Anneka Gupta remains as president and head of products and platforms and longtime Acxiom vet Sheila Colclasure continues as chief data ethics officer and head of public policy. Read the release.

Amazon subsidiary IMDb is launching a free ad-supported streaming service for Fire TV, the Amazon connected TV platform. Amazon has spoken to at least three media executives about including content, according to CNBC. The product will be similar to Hulu’s ad-supported version and the Roku channel. The problem is, despite having Amazon Prime and Fire TV, the company doesn’t have much video inventory to work with. Amazon won’t show ads on Prime because its streaming library is a popular entry point for new subscribers to the loyalty program, which is more important than ad revenue. At this time, Amazon’s video inventory is limited to product review videos, a smattering of ad-supported free video content and a handful of streaming distribution deals with the NFL and others. A free IMDb channel may not be a disruptive force on its own, but it could play a valuable early role as Amazon ramps up its supply. More at CNBC.

“They’re attentive, and you have the sense they’re human beings that are trying to nurture a relationship of some kind,” said Jane Goodall about her time among the chimps. Oh, wait, that’s  what a publishing exec told Digiday about working with Apple News. But Apple’s human touch helps because those same publishers feel disregarded or misunderstood by platforms like Facebook and Google that don’t feature editorial judgment for news products – as BuzzFeed, Vox and HuffPost have said about being considered equally sincere news outlets or liberal counterweights to some conservative media companies. But Apple News still lags far behind in terms of ad revenue, and Apple’s 30% cut of subscriptions is so big it’s hardly worth the effort.  More.