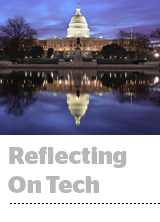 TV networks are banding together to create a standard that will enable addressable advertising on smart TVs. NBC Universal, Disney, Discovery, Turner, AMC Networks, Xandr, FreeWheel and Hearst TV are part of Project OAR (Open Addressable Ready), and Vizio’s Inscape will power the tech, available across its 10 million devices. Smart TVs give TV networks a way to sell addressable inventory, which previously had only been available through cable set-top boxes and video-on-demand. “This shows the industry is leaning in, especially the broadcasters that have been left out,” Matter More Media CEO Tracey Scheppach told AdExchanger. With a smart TV standard, marketers can buy addressable TV through programmers, not just content distributors. Read more.

“The digital promised land has a few mines in it,” remarked Sen. John Kennedy, R-LA, Tuesday at a Senate Judiciary hearing convened to discuss the ins and outs of GDPR and California’s new privacy law. The witness list included Alastair Mactaggart, the businessman who helped push the California Consumer Privacy Act onto the books, Intel’s global privacy officer and the founder of DuckDuckGo. But it was Will DeVries, senior privacy counsel for Google, who drew the most attention from legislators. In reference to Google’s tracking of geolocation data, for example, Sen. Josh Hawley, R-MO, said: “It’s kind of like that old Eagles song, ‘You can check out anytime you like, but you can never leave’ – that’s what it’s like dealing with your company and that’s a problem for the American consumer.” Sen. Marsha Blackburn, R-TN, chided tech companies, including Google, for not supporting opt-in consent because “it would change your business model and it would diminish your profits.” But Kennedy won the day with this barb about the length of Google’s user agreement: “You can hide a dead body in there and no one would ever find it.”

If you haven’t heard about IPv6, it’s because, well, you really haven’t needed to. The internet grew up with IPv4, a four-part sequence of numbers assigned to routers. But as the number of connected homes and devices multiplies, it’s stretching the limits of the old IP standard. IPv6 means internet service providers can track and assign new IP addresses (which happens when someone reboots their home Wi-Fi) without duplicating accounts. But the change has knock-on effects for digital advertising, since IPv6 means every device can have its own ID, instead of being masked by the household IP address, Digiday reports. This means IP addresses, which already counts as PII under GDPR, will be proxies for specific devices and individuals, bringing much more privacy scrutiny than using an IP address as a loose proxy for a household in TV campaigns. “The IP address is designed for the internet to provide network routing and has been used and somewhat abused for advertising,” says Extreme Reach CTO Daniel Brackett. More.