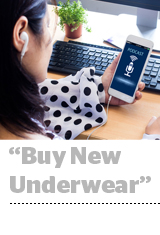 DTC brands love podcast advertising. Take MeUndies, which has sold 9 million pairs of underwear and expects to post $75 million in sales this year after shifting some of its Facebook ad dollars to podcasts four years ago. The brand, which got into both the DTC and podcast ad spaces early, was able to ink deals with popular shows hosted by celebrities, such as Marc Maron and Anna Faris, thereby carving a lucrative niche for itself in the podcast world. “For us, it resembled the same characteristics as a friend referral,” MeUndies founder and CEO Jonathan Shokrian told Bloomberg. But while podcasting works well for a scrappy startup brand like MeUndies, bigger advertisers need to make sure the medium makes sense for their message when exploring podcast advertising. More.

Streaming companies are trying to figure out the right revenue balance between advertising and ad-free subscriptions. So far, ad-free streaming has run away with the audience. An “ad-supported product, delivered in the right way to the consumer, is here to stay,” Linda Yaccarino, NBCU’s chairman of ad sales and client partnerships, tells eMarketer. In terms of streaming providers that offer options, Hulu is the petri dish of the category, with ad-free, ad-supported and live television offerings. But Hulu has been forced to raise the price on its OTT TV service, suggesting its low-cost subscription isn’t getting the ad revenue support it needs. “Pure subscription services like Netflix will, at some point, have to resort to additional monetization options (i.e., advertising),” says eMarketer principal analyst Paul Verna. Even so, competition for eyeballs is fierce, and it’s not going to be easy for the hybrid or the ad-supported options. More.

Omnicom’s Q4 and full year earnings came in stronger than Publicis, with organic revenue growth of 3.2% to $4.1 billion for the quarter and 2.6% to $15.3 billion for 2018. While most of Omnicom’s core disciplines saw growth across markets, the group’s CRM consumer support division continued to see a decline of 3.7% in Q4, which “weighed down” growth in the United States and United Kingdom, said Omnicom CEO John Wren on the company’s earnings call Tuesday. “The last two years have been years of transition,” Wren said. “Amazon and online delivery eliminated the need for activities on a retail level that’s happened in the past.” Omnicom disposed of 20 companies in 2018 and will continue to offload agencies that are not core to its strategy this year. At the same time, it will continue to invest in CRM, media, healthcare data and analytics, as well as its matrix structure, which makes it easier to work across agencies to meet a client’s needs. Read the release.