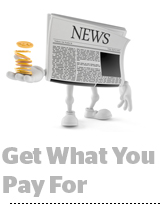 In a conversation with Axel Springer CEO Mathias Döpfner, Mark Zuckerberg suggested creating a dedicated Facebook news tab and paying publishers directly to publish there. Watch the video. It’s not the first time Facebook has floated launching a dedicated feed for news content, but paying publishers a licensing fee would be a shift in the platform’s digital advertising-based revenue model. “This isn’t a revenue play for us,” Zuckerberg said. “The relationship between us and publishers is different in a surface where we’re showing the content on the basis of us believing that it’s high-quality, trustworthy content.” Facebook plans to have a news tab live by the end of 2019, Recode reports. But there’s no guarantee it will pay publishers directly. Either way, news companies are likely to be skeptical of another Facebook traffic play. More.

Alibaba is the biggest digital ad platform in China, and as an ecommerce marketplace with grocery and delivery business ventures it’s a pretty good example of how Amazon could squeeze more revenue out of the Amazon Advertising Platform, The Information reports. But would Amazon want to? Alibaba made $40 billion last year to Amazon’s $233 billion, though it closes the profit gap because Amazon’s operating margin is 5.3% while Alibaba has a margin of 28% for its ad-based business. Alibaba is developing new product recommendation ad units that would fill the same kind of “recommended for you” inventory that Amazon uses to promote its private label brands. Alimama, the company’s digital marketing division, is also collaborating more deeply with other Alibaba business units. More.

Instagram is warming up to the idea of allowing ads on its IGTV video service. The picture-sharing platform launched IGTV as a standalone app last year, and everyone knew it would eventually bring marketers to the platform. The first steps will be along the lines of sponsored and branded content, Ad Age reports. But IGTV is also considering ad breaks, like the ones that appear on YouTube or Facebook’s Watch video hub. Facebook hasn’t gotten the traction it hoped for with IGTV, but for the Newfronts it’s bundling the app with Facebook Watch because it needs more video supply, especially longer-form content. “They are putting a lot of emphasis on IGTV as a YouTube competitor,” according to one agency exec. More.