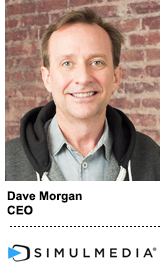 Simulmedia was doing data-driven TV before it was buzzy.

Launched in 2009 by ad tech entrepreneur Dave Morgan, the platform is a two-sided marketplace that aggregates supply across national and local TV and facilitates audience-based buying at scale.

While linear TV audiences have been on a steady decline over the past few years, the problem for advertisers isn’t a lack of viewers, Morgan said.

“It’s that audiences have fragmented,” he said. “The pricing, packaging and measurement has become obsolete.”

By taking the legwork out of aggregating supply across major networks, which all have their own sales teams and audience definitions, Simulmedia aims to solve workflow inefficiencies for buyers while driving higher yield for sellers. The platform licenses data from satellite, cable and telco companies as well as smart TVs, in total covering 35 million US citizens, to help buyers reach their intended audience.

Simulmedia employs 75 people, more than half of whom are engineers and data scientists. The company doubled revenue year over year with the same number of employees and cost structure. Morgan declined to disclose revenue, but noted that Simulmedia is profitable.

AdExchanger: How does your platform work?

DAVE MORGAN: We’re using data science and software to [help marketers achieve] the most cost-effective and unduplicated reach over a given time period by focusing on people likely to be responsive. Our system traffics that in an automated way. We then track in real time the delivery and results, whether it’s app downloads, bookings or transactions or reach against the target.

Are you an agency or an ad network?

Our job is to deliver the best campaign possible with their budget and objectives, but we’re selling that campaign. We very much have a vested interest.

The most important thing we’ve changed is we went 100% transparent on media, data and tech costs. Before we were very focused on delivering an outcome. We didn’t realize how much being a black box would slow things down. It opened the offering to mainstream marketers where transparency was critical.

How has your client mix changed over time?

The real growth has been DTC. They’re not focused on just the cost-per-media unit. They’re focused on the effectiveness and results. They’re following the footsteps of digital brands.

How difficult is it to access inventory from the networks?

There’s the business opportunity to access it, and then there are the technical barriers. The networks have appropriately been very careful about letting a third party sell their inventory.

But the best opportunities are to find the high-value people in underappreciated spots. We actually drive some significant volume. The fact that we’ve achieved real scale helps. So accessing inventory is appropriately difficult, but we have great relationships across the board. That took a long time for them to get used to.

The networks are getting savvier with advanced TV. Is there a threat you’ll lose access to their inventory?

I’m not too worried about it, as long as we can continue to yield more money. I applaud them for their offerings, but it’s already clear agencies are not going to negotiate and optimize four or five different audience-based buys from different companies.

They will continue to buy audiences that are part of a content package from the networks. But there is a need for a company, and maybe a couple, that can work across the major TV companies.

Who do you compete with? How do you view DSPs going after TV dollars?

There are similar offerings on a local basis. There are addressable offerings. Sometimes the budgets are just to do something new, so we compete a little bit with any innovative offering.

We’re certainly watching [the DSPs]. They want the TV budget for sure. But the technology and the processes are opposite. DSPs are real-time decisioning systems. They’re trading commodities at the last millisecond. In TV, demand exceeds supply. You can never decide in milliseconds.

You recently raised $29 million. How are you using the money?

We’re keeping it in the bank. We’re looking at opportunities and continuing to invest in technology.

More than half of our team are engineers and scientists, so we’re able to invest out of our working capital for R&D. We’re investing very heavily in these digital-first, performance marketers. We’re investing heavily in pipes – how we move data, information and instructions back and forth.

Simulmedia has been an independent company for 10 years now. What’s your end game?

In my experience, companies are bought, not sold. The mission is far from accomplished. We want to fix TV advertising and bring a digital approach to TV. We’re not in a hurry.