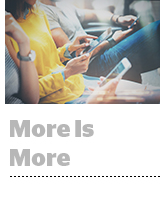 Too Much Of One Good Thing

Many American technology giants rely on one revenue stream, like Google and Facebook with ads or Netflix with subscriptions. But tech companies in China, where mobile is a bigger portion of the economy and ads are less lucrative, show how Silicon Valley might diversify, writes Andreessen Horowitz partner Connie Chan. While Amazon sells books, for instance, Chinese consumers can read most of a book for free (presumably they’ll be hooked) and pay per 1,000 words. Authors can publish content for free and request tips between chapters. Mobile video also has fewer ads, focusing on dynamic product placement or the ability to save coupons to a mobile wallet. The problem with single-source revenue businesses is that they are more exposed to the whims of consumers. “Revenue is simply a proxy for how you are serving your customers,” Chan writes. “As you diversify and experiment in generating revenue in new ways, you are effectively honing in on your ability to give customers what they want, how they want it.” More.

Google will prioritize news briefings over longform audio news through its Google Assistant, VentureBeat reports. The tech giant has been working with news outlets including the Associated Press, South China Morning Post, The Hollywood Reporter and CNBC for the past year to help them develop 50-second to two-minute briefings covering the major headlines of the day. When users say, “Play the news,” Google Assistant plays up to eight briefings in a row before moving on to longer form stories, which can last from two to 15 minutes. The feature gives Google even more influence over how news is distributed. Meanwhile, Amazon Echo offers similar short-form briefings when users say “Alexa, what’s my flash briefing?” More.

When Netflix released “House of Cards” in 2013, it was the first time it made an entire season available at once. Binge-watching is now mainstream, and replicated by the likes of Amazon and Hulu. Viewers’ streaming preferences are working their way into how every movie and TV studio and major media platform thinks about content production. Streaming show writers don’t have to write around TV commercial breaks and can dictate the length of an episode or number of episodes in a series. Audience data is also driving programming decisions. “We can see from the data how many people start watching a show, how many people complete the season, and that tells us a lot about how popular it is and how sticky it is, so we use all that information to help us decide whether to make another season,” Netflix’s VP of original content, Cindy Holland, tells The Wall Street Journal. More.