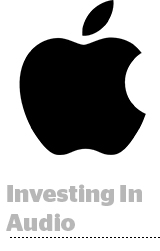 Apple is exploring an equity stake with debt-saddled radio giant iHeartMedia in the hopes of boosting its presence in the audio streaming space. Talks are preliminary, but people familiar with the discussions say a potential stake may be worth tens of millions of dollars, according to The Financial Times. Or Apple might develop a large marketing partnership rather than a direct investment. A deal could expose Apple’s Beats 1 radio station to older audiences on broadcast and help the device manufacturer forge closer ties with the music industry as it ramps up its services revenue. And iHeartMedia could use the cash. The company, which owns 850 radio stations in the United States as well as out-of-home media seller Clear Channel, filed for bankruptcy in March with $20 billion in debt. More.

Shots In The Dark

HBO and its sister channel Cinemax were dropped from the Dish satellite TV package because the two sides haven’t been able to settle on new distribution terms. It’s the first time in HBO’s 46-year history that the channel has gone dark on a pay-TV service. Dish alleges HBO is making “untenable demands,” because harming Dish favors the AT&T satellite service DirecTV, reports Broadcasting & Cable. AT&T, for instance, offers HBO at a discounted rate to wireless users and DirecTV Now streaming subscribers. The sticking point is that HBO wants subscriber guarantees from Dish, and Dish is resistant. “If the distributor can’t meet that mark, it is on the hook for making up the difference,” The Wall Street Journal reports. “If it exceeds the mark, it keeps a larger chunk of the subscriber revenue.”

The Price Of Premium

OTT inventory might be all the rage, but the ad tech companies that hope to traffic premium inventory will have to figure out a new business model, writes Cadi Jones, EMEA commercial director at Beeswax, for The Drum. Ad tech companies that hope to play in OTT simply won’t get as high a margin as they do in the digital ecosystem. In taking a percent of media, ad tech middlemen get way more from a $40 CPM than from a $4 CPM, even though it costs the same to deliver the goods. Pricing models could change fast though as TV advertisers and broadcasters – which typically allocate about 1% of campaign spend to media-buying software – shift to data-driven automation but refuse to abide by digital inventory standards. “As a media seller, you shouldn’t be penalized for the value of your inventory,” Jones writes. More.