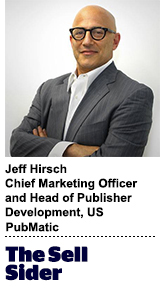 Today’s column is by Jeff Hirsch, chief marketing officer and head of publisher development, US, at PubMatic.

Strategy and tactics work hand in hand but are not the same thing.

Strategy is a long-term plan put in place to achieve specific goals. Tactics are tools, techniques or methods used to move the strategy forward in achieving those goals. When publishers confuse the two, problems often follow.

We saw it when header bidding first came on the scene, where the strategy was to expand the reach and value of inventory through an auction process. That was, and is, a great strategy, and header bidding is a tactic to achieve the strategy’s objectives, not the strategy itself. Some publishers who failed to grasp the difference struggled to reach their goals.

Like header bidding, PMPs are a great tool. The strategy it supports is to move direct-sold insertion orders to programmatic pipes to facilitate more efficient operations and create a transparent, brand-safe environment that deepens the relationship between buyer and seller.

But despite this being a great strategy and a great tool to execute it, many publisher-created PMPs launched over the past several years have struggled.

So what’s the problem? Is there an endemic flaw in PMPs’ value proposition?

Absolutely not, as demonstrated by the growing number of publishers using PMPs successfully. In its 2018 forecast for programmatic ad spending, eMarketer projects US PMP spend will rise 37% this year.

Still, some publishers are succeeding with PMPs while others continue to struggle. One big reason for the first group’s success is that they recognize PMPs for what they are: a tactic, not a strategy.

PMPs can play a valuable role in a publisher’s overall strategy. On an operational level, they enable direct programmatic selling of inventory with greater control over rates and higher CPMs than open RTB. Properly structured and functioning PMPs provide scale, quality and data advantages over the open market.

PMPs give publishers control over who buys their inventory and at what minimum price, while marketers gain visibility into and control over the publisher sites on which their ads will appear before the ad goes live. It’s a win-win situation that strengthens the relationship between seller and buyer.

Again, the publishers least likely to succeed with PMPs are those that fall into the trap of conflating tactics with strategy. Too many publishers have self-launched PMPs without having a specific buyer in mind, let alone a comprehensive strategy.

To succeed, publishers must leverage PMPs with unique selling propositions that differentiate them in the marketplace and generate advertiser demand, and they must actively market to buyers. Value-adds can include access to publisher first-party data, more granular audience segmentation and targeting and larger creative sizes only available through PMPs. Of course, inventory must be fraud-free, viewable and brand-safe.

Given their current rate of growth and the clear benefits they provide to both buyers and sellers, PMPs are a tactic all publishers should seriously consider right now. But will PMPs turn into a long-term tactic in publishers’ strategic arsenal?

By definition, a tactic is a timely solution to a strategic challenge, so no tactic is inherently permanent. Some believe PMPs will become less relevant once confidence in the open market is fully restored. Given the realities of today’s programmatic environment, the challenges that exist on both the publisher and marketer sides and the limited range and effectiveness of other solutions currently available, PMPs look to have some staying power.

To make the most of them, though, publishers have to keep in mind that there is a difference between a tactic – even a great one – and a strategy, and proceed accordingly.