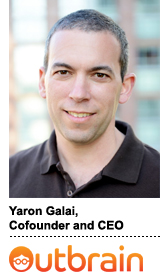 Much has changed since Outbrain was founded in 2006. Clickbait is no longer in favor but supply chain hygiene is, your in-laws are sharing fake news and whenever Facebook stirs, many of the little pubs worry about getting crushed.

But Outbrain seems to still be going strong. Co-CEO and co-founder Yaron Galai declined to share financials but said, “We are happy with them.” In the meantime, he’s personally overseeing Sphere, a product that gets away from the familiar cost-per-click (CPC) model.

Don’t call it a directional change yet. Sphere launched mid-February with five partners – CNN, Meredith (including Time Inc.), Fox, Penske and Getty. It’s billed as a network for premium pubs, meaning that instead of recommending slideshows of celebrities who didn’t age well, it will show personalized content to drive engagement for participating publishers.

AdExchanger: How has Outbrain adapted as sourced traffic came under fire?


YARON GALAI: Most of our buyers are actually marketers looking to get the right audience into their content. I understand the criticism of paying for traffic. But the value in the cost-per-click world is that you only get people to click on content if it’s valuable enough.

Facebook has been hit with criticism because of the content on its site. Does Outbrain have to be wary?

[Driving clicks is] a great proxy for people’s interest. On the other hand, it shows the value of the headline, not the content itself. The industry will move to look at the engagement after the click and not the click itself.

Fake news is engaging, though. Have you had to crack down?

We constantly monitor our network. We probably coined the term fake news back in 2011 or ’12. We completely blocked it and got rid of 25% of our revenue at the time.

The problem is concentrated with social networks like Facebook. By connecting a very small feed of paid fake news, you can get a lot of social sharing and that is what the fake newsers are interested in: the additional impact, which is free. With Outbrain, all of the traffic is paid for. The incentive is not there.

Sphere’s marketing copy encourages publishers to leave the Facebook ecosystem. Can Outbrain compensate for the traffic that publishers lost when Facebook changed its algorithm?

Sphere is less than a month old. It’ll take time before we completely replace the reliance on Facebook. But Outbrain, as a platform, reaches about 1 billion users every month, so it’s at Facebook’s scale. It’s a matter of building up Sphere distribution.

How many publishers should be in Sphere by the end of 2018 for it to be considered a success?

The success metric for us is the quality of the recommendations and the engagement with users of that content. It’s baby steps.

Users weren’t always getting the best recommendations, partially because there is a bidding system behind the scenes. We’re trying to build a content recommendation engine that always optimizes for users and personalization. Cost-per-click is something we did away with in Sphere. We’re looking at longer-term engagement of the user as a proxy for what they found to be interesting.

And that proxy is whether they click beyond the landing page

That’s the only piece of data we’re looking at in terms of whether people found the content to be engaging.

Isn’t there value in bidding? Certain audiences are more valuable to certain publishers.

There is. The flip side of it, which we’re seeing with Facebook, is if you can get your click-through rate to be high, you can bid down. You can go really low with the CPC. That incentivizes clickbait. That impact is really negative on Facebook and the entire industry.

How are you feeling about GDPR?

We’re very active around GDPR, and we’ll be fully compliant by May. In general, I think GDPR is a very good thing.

To what extent is it possible to prepare for GDPR? It seems like the EU lawmakers are still figuring it out.

With any big change like that, there’s going to be a lot of figuring it out in the first few months, and we’ll get smarter and smarter. But the intent and spirit is clear.

Are bots a problem on the Outbrain network?

We’re very good at monitoring and filtering out bots. Bots work very well in display and video, where you can stuff a lot of ads and get paid on a CPM business. It’s way more difficult to implement bots in a cost-per-click world because you have to get that user engagement to get paid at all.

The fingerprint is much more clear when you have a bot clicking through. So for every 2,000 to 5,000 ads you see, you might engage with one. It’s easy to trigger 5,000 ads without looking suspicious. It’s very difficult to create many clicks without looking suspicious. It’s very different behavior, so it pops up much more clearly.

There are a lot of content recommendation companies. Will the ecosystem consolidate?

Outbrain invented the space and we’ve been the leader since we’ve invented it. There’ve been quite a few companies who’ve taken inspiration from Outbrain and look fairly similar. It’s a multibillion-dollar market. We believe there’s room for everybody. We’ve acquired companies to date, but those have been acquisitions of things we want to build out.

Do you see yourself acquiring a competitor like Taboola and becoming a mega-network?

We are a mega-network and we’re happy with our size and growth. We’re not looking to make any of those. If our history is any indication, all of our acquisitions have been about technologies we want to add, like the Zemanta acquisition.

The interview has been edited and condensed.