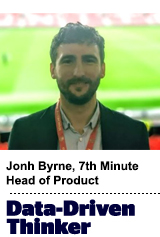 Today’s column is written by John Byrne, head of product at 7th Minute.

Imagine being a brand marketer and having the ability to instantly understand the precise moments on TV that impact your brand (positively or negatively) and the context in which they occurred. Then imagine being able to follow this up with an automated and relevant ad in real time. Digital ad creative, delivered via an omni-channel campaign, reflects the discussion taking place, or the product or logo that is visible, at that specific time on live TV and is therefore seen by an already-primed audience who is thus more likely to take action.

Context, in terms of a viewer being in a frame of mind that is receptive to the message in question, is a regular topic in advertising. Its importance was further reinforced in a recent Integral Ad Science study showing that context can increase the memorability of an ad by up to 40%.

And as the advertising ecosystem faces the reality of the third-party cookie’s mortality, conversations around context are getting more serious and urgent. Analysis of broadcast data can provide the depth of insight outlined above, and it delivers the potential to form the core of contextually led strategies that are effective but also privacy-compliant.

ACR is identification technology that can recognize and identify media content that is played on a device or stored in a file. It is widely used in connected TV (CTV) to track what content people watch on their smart TV or connected device.

These contextually led strategies are made possible through computer vision, an artificial intelligence (AI) discipline that enables computers to derive deep understanding from visual inputs such as digital pictures and videos. In effect, it enables computers to “see” in the same way that other branches of AI allow them to “think.” Vitally important in a world that relies so heavily on images, computer vision is increasingly used in a variety of applications, such as analyzing ad creatives to ensure they are working as effectively as possible.

OCR, which has been a feature of business life for many years, is the electronic conversion of text images (typed, handwritten, printed, etc.) into machine-encoded, or digitized, text that can be edited, stored and searched.

Why does this matter for advertisers?

Computer vision has an unrivaled ability to process and analyze digital images, video and audio content in real time and at unlimited scale, and combine this with AI and machine learning (ML).

Used together, ACR and OCR can convert broadcast content – from both programs and commercial breaks – into usable data that is processed, contextualized and organized. From there it can be analyzed and queried for insights to inform when and where to advertise and with the message that is most relevant to that particular moment.

This technology is no longer the sole domain of big brand advertisers and agencies; thanks to cloud computing and “as a service” offerings, it is increasingly accessible.

Brands now have the tools to undertake smart contextual advertising based on TV content; the vast budgets traditionally associated with the channel are no longer a prerequisite, opening up TV-related campaigns to a wide variety of previously excluded players.

“Moment marketing,” for example, described in the introduction, relies on computer vision and an automated ad-serving process to put a relevant ad in front of the right audience at a time when they are likely to be engaged with the topic or brand as a result of what is currently on TV.

A fast-food outlet could promote itself as TV viewers react to people eating pizza in a film by searching for takeaway food options, for example. On a healthier note, a low- or no-alcohol brand might want to take advantage of TV news items and features highlighting the UK’s “Go Sober for October,” as well as the more globally focused “Dry January.”

Live televised events also offer extensive opportunities to be part of the moment, with sports – from the Olympics to the Super Bowl – as a particularly valuable option. Automated pre-prepared digital ads supporting a team or an individual can be shown on a second screen at the most appropriate moment. The ads can suggest celebrations – or commiserations – of a win or loss with the purchase of that brand, for example.

In effect, moment marketing inserts a brand into the conversation at the time when the recipient is most likely to respond with the desired action – without the need for a costly “always on” advertising strategy.

Brands can also use historical data to understand the TV content that shapes online interest relating to their offerings. From there it’s a straightforward step to monitor TV signals in real time and have a campaign ready to go as soon as the resonating topic is on-air again.  Equally, knowing that competitors featuring on TV (whether during a program or as a result of an ad) drives traffic to their own websites allows for an informed media plan highly likely to drive results.

Computer vision produces TV-related data at a scale that has not previously been conceivable; the insight this delivers opens up new opportunities for advertisers, marrying TV engagement with digital and social media and the popularity of second screening.

And because creativity (in terms of the ads themselves, but also how best to join a conversation) carries more weight than budget, it allows smaller brands that might not previously have considered connecting to the TV agenda to expand their media strategies.

At the heart of this lies context, and drawing all these benefits together is an important task for any advertiser.