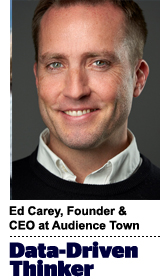 Today’s column is written by Ed Carey, founder and CEO at Audience Town.

To grow and compete with the digital giants, innovation in ad tech will need to shift vertically to capture new clients.

Vertical refers to products, processes and people skills aimed at a single industry. Google and Facebook sell many of the same horizontal products and solutions to every industry, rather than vertical industries.

Horizontal ad companies overlook big established industries such as real estate, healthcare and education, which often represent the most important purchase decisions in people’s lives. New industries like cannabis and direct-to-consumer also get overlooked. Big and new industries are harder to figure out and subject to government regulations. Verticals can wedge in here.

There is also a gap in positioning. Generalist providers may not fully appreciate vertical client problems or needs, so they communicate with clients in the language they understand – their own. Specialists may have empathy for their clients in a way generalists may not.

Google, Facebook, Amazon and other horizontals are valuable when marketing low-consideration and low-cost products. But things change when the industry products being sold are expensive and highly considered over months and years. Attracting new consumers is different than getting more clicks. Vertical products and pricing designed for a single industry can perform better.

A vertical ad tech company molds itself to the products being marketed.

Every industry has endemic offline and client data, for example, that has not been onboarded into the marketing ecosystem or advertising platforms. Unique data is the core of vertical businesses, because certain industries don’t have much online data to inform ad campaigns or predict consumer behavior. This is an opportunity, especially given the march of consumer privacy regulations.

Verticals also write ad targeting algorithms that factor for the product being marketed and the consumer behavior to purchase it. The types of logic needed to persuade a person to click on a $2, $20,000 or $2 million consumer product are very different. The tech, whether it’s an analytics screen or media buying dashboard, can also relate to customers with endemic language and visualization.

And here’s a twist: Vertical ad tech is built on top of horizontal ad tech. All the major horizontal ad platforms offer vertical channel partners some mix of API, investment, integration or support. These mature players are eager to integrate vertical ad tech companies for one very good reason: New revenue streams from new markets is a preferred way to scale their platform businesses.

The future is vertical, again.