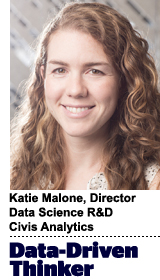 Seven years ago, I was hanging out at CERN, the European Organization for Nuclear Research, working as a graduate student researcher and riding along as the particle physics community discovered the Higgs Boson.

A few years later, I sat in my first marketing planning meeting, representing the data science team. As a scientist, it was weird. There were a lot of buzzwords thrown around. When people talked about “metrics,” they were referring to impressions, not sales. We spent an hour crafting brand personas, an exercise that seemed to hugely oversimplify the world of potential consumers and leave a lot of potential sales on the table.

Over the last several years, I’ve participated in many of these marketing discussions and worked with teams across industries, all with the same goal: say the right thing at the right time to the right people using data. I’m not surprised by the number of studies showing that organizations are struggling to make data-driven decisions.

There are a number of complex technological reasons, but most of it comes back to people. The crux of the issue is that data scientists often lack business context. As a result, several things happen.

People are surprised to find out that roughly 80% of a data scientist’s time is spent preparing data for analysis. What often seems like a simple task at face value can turn into weeks, months or even years of work. It’s not easy to get all the data sets in one place, especially at a large company where the data lives across teams, in an average of 15 places. As the number of data sources grows, it only gets harder to keep all this data organized, accessible and useful.

Since it’s a relatively new profession, there’s a lack of consensus on what falls under the umbrella of “data science.” Do you want someone to quickly connect various data sources? That’s the job of a data engineer.

Are you looking for a causal analysis or predictive analysis? Those aren’t the same thing – a statistician or social scientist will be an expert in one (namely, understanding causation), a machine learning researcher in the other (namely, using correlations to make predictions).

Within data science, there are also different coding languages – R, Python and SQL are most popular – and data scientists tend to strongly prefer one over another. Data visualization, a common ask of data scientists, is actually better handled by, or in partnership with, someone with a communications background.

Tension between speed and accuracy

Many data scientists come from academia, where accuracy is paramount to everything – spending two months tweaking a model so it’s 1% more accurate is perfectly acceptable. Business-minded colleagues, though, want quick, actionable insights, where it’s fine for a model to work across 14,000 stores and fail at five.

This leads to frustration on both ends: A data scientist can feel as though their work is being “dumbed down” in favor of speed, and a marketer doesn’t want to wait around for the scientific perfection that’s hard to achieve in a business context.

Like designers, data scientists are often seen as “specialists,” so colleagues don’t want to “bother” them with extra meetings (or at agencies, don’t want to give their P&L the budget). As a result, they are brought into projects late in the game and get prescriptive direction, leading to a lot of back and forth and overall frustration. The well-documented tension between creatives and scientists doesn’t help either.

Many methodologies used by marketers – and even the way they describe those methods ­– confuse data scientists. For example, with attribution, data scientists think in terms of causal inference, the study of why things happen. It goes beyond correlation (we advertised to someone and they bought something later) and into causation (we advertised to someone and because of that action, they bought something later). Don’t even ask us about last-touch vs. first-touch models.

So, what’s the solution here, beyond giving data scientists more context and the space to be hands-on-keyboard?

A marketing team can build around a specific business outcome. When data scientists are included in business discussions from the start, they’ll understand the objective that the team is trying to solve for. This gives them the intellectual freedom to explore solutions – and maybe even find a better option than what was initially considered – rather than feeling like order-takers.

Someone can also be designated as a “data ambassador.” Find a unicorn at your organization, someone with deep business and technical data science knowledge. Ask them to serve as a bridge across teams, representing both points of view in relevant discussions. McDonald’s has an entire team dedicated to this, which it calls the “measurement of the future” team, that has successfully enabled data-driven decision-making across marketing.