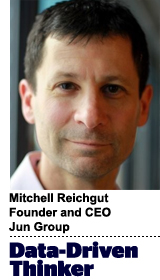 Today’s column is written by Mitchell Reichgut, founder and CEO at Jun Group.

There’s a parable about a master calligrapher who sold his work for enormous sums of money. One day, a man asked the calligrapher how long it took to create one symbol. The calligrapher replied, “Thirty years and 30 seconds.”

The ad tech industry loves perceiving itself as moving at the speed of light. There’s a hot new acronym or buzzword every week, and not a day goes by where we don’t simultaneously brag about and bemoan the fact that everything is constantly changing.

The reality is, however, that many fundamentals of our business took years to develop.

Take native advertising, a term first coined in 2011. The total number of apps with native ad inventory skyrocketed by 251% from 2015 to 2016. Then boom: Native ads made up more than 58% of US digital display ad spending in 2018, and it is estimated that by 2020, native display ad spending will grow 20% to $52.75 billion. But it didn’t all happen overnight. This ad spend takeover was a slow process that took eight years to come to fruition.

The same progression happened with programmatic advertising. Programmatic raked in a cool $60 billion in 2019 ad dollars, according to eMarketer. By 2021, eMarketer estimates that 88%, or $81 billion, of all US digital display ad dollars will transact programmatically. Now, that’s an overnight success – until you remember that the first real-time bidding programmatic exchange opened in 2007. Demand-side platforms weren’t in high demand until 2011-2012. However, the revolution was a long time coming. Only after 12 years of setbacks, challenges and evolution has programmatic emerged as an ad powerhouse.

Value exchange advertising is another hot commodity that has a longer history than you’d expect. The opt-in ad format grabbed the spotlight late last year when the IAB published the 2018 Value Exchange Playbook, yet it first came on the scene with the rise of social games like Farmville in the early 2010s. A decade later, giants like Spotify, Pandora and Google all use value-exchange ads on their platforms.

It is easy to look at platforms that currently dominate daily life, such as YouTube, as if they had overnight success. In reality, YouTube took years to draw an audience that now surpasses 1 billion monthly users. When YouTube started in 2005, it was an eclectic niche culture of people making videos from their bedrooms. People laughed at Google for spending $1.65 billion to purchase YouTube only a year after its launch. It took around a decade for YouTube to begin producing original content, perfect its ad offerings and near the success people see today. Something as ubiquitous today as YouTube did not emerge with one viral hit but over many years of growth.

Instagram is another ad environment that did not instantly become the platform of moms-turned-influencers and dog celebrities that we know today. Product and sponsorship tags did not exist on Instagram for the first several years after it launched in 2010. Millions use it every day, pushing Instagram to grow in ways that now include advertising and commerce. Tapping a product photo and shopping it is a commercial avenue that took time to evolve. The platform is now estimated to be worth $100 billion, 100 times what Facebook paid for it in 2012.

Shaking up any industry, even one as seemingly fast-moving as ad tech, takes time. Revolutionary new trends often have years of trial runs, false starts and beta testing. Whether it’s programmatic or platform growth, native ads or networks of influencers, these developments take years before they finally get their big break.

As for the overnight sensations that people love to lionize? Most don’t last.