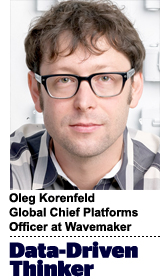 I assume that digitally focused marketers usually don’t spend much time thinking about out-of-home (OOH) media, at least not compared to the time they spend focused on desktop, mobile and over-the-top TV (OTT).

But broadly speaking, if you consider all the possible billboard screens, from Times Square’s giant installations to captive screens above sports bar urinals, OOH’s reach may be bigger than television, with the highest effective reach of any channel.

Americans spend about 70% of their time outside of their homes, and there are around 1 million digital OOH displays in the United States already, according to current estimates revealed at a Digital Place Based Advertising Association (DPAA) conference last month.

The scale is growing fast because large and small cities and venues want to give people an immediate digital way to connect. OUTFRONT Media, for example, is about to roll out 50,000 screens across New York City’s public transportation system – even inside subway cars.

It’s also interesting that OOH media owners are starting to think of themselves as publishers, not just wall space. They broadcast content, create experiential moments by using touch screen technology and, using LinkNYC as an example, they provide useful utilities such as Wi-Fi and mobile charging.

So it’s safe to argue that, unlike before, consumers are now having a “lean-in” vs. peripheral experience with these billboards.

Learning from the recent past

According to Out of Home Advertising Association of America, 4% of total US media spend is OOH. The current forecasts peg DOOH growth at 10% every year over the next four years. This year alone, the expectation is that digital will account for around 37% of the overall OOH spend, which is a 35% jump from 2018.

Digital formats are undoubtedly growing and changing the OOH space. But the question is: Are we getting to a critical mass where the technology automation that drove desktop, mobile and OTT now has meaningful scale in DOOH?

And are we going to be mindful of what it will mean for technology-driven ad delivery and measurement of this channel?

We must recognize the similarities in technologies that power desktop, mobile and OTT automation and not try to reinvent the wheel every time. Looking at DOOH in isolation would only mean expensive fragmentation in audience measurement, media management and the usual waste on over-engineered tech stacks.

Supply curation and quality control are simpler and more manageable in DOOH only because there are so few publishers in the general OOH space. This means it is much easier for DOOH aggregators, such as Place Exchange, to basically handpick what goes into demand-side platforms.

I would like to remain realistic about technology expectations. Like everything else so far, the first few years of anything labeled “programmatic” started as “program-manual.” The typical first move is to automate what was done previously, not to reinvent the channel considering available technology. That comes as the channel gains traction, which is followed by spend and the investment needed for development.

But because this is the fifth time we are taking a media channel and automating it – we did the same with desktop, mobile, linear TV and OTT – I believe it is fair to expect the same user interfaces, device ID pools, reporting, attribution and even creative.

This means legacy elements, such as measurement, must change in OOH, in the same way we now expect from TV. And it must change to be more like digital, not by trying to retrofit the new into the old model.

Finally, let’s not forget the human element. As with TV buying, legacy OOH buyers will have to manage the transition to become digital buyers so that we avoid silos and fragmentation.

Are we there yet?

Is 2019 the Year of DOOH? Will it be the year where we deploy programmatic in scalable adoption of this channel? As we know, anything that can be automated, will be automated.

The DPAA estimates that programmatic DOOH spend was about $75 million in 2018, which is tiny compared to desktop and mobile. But with the buying community clearly looking to automate where possible and defragment tech stacks, while, in parallel, OOH publishers, such as Clear Channel Outdoor, are quickly digitalizing their billboards, I believe it’s safe to assume that scaled adoption is around the corner.

For marketers, any audience defragmentation also means a better understanding of reach and frequency. The more channels that can be measured using the same methods while applying the same meaning to a unique user only means there will be less overspend of media on spillover audiences.

In other words, DOOH is a very welcome reinvention of what has always been a strong channel.