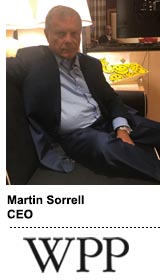 WPP is embracing the forces of change – both internally and externally.

“We’ve seen it amongst clients and media,” he told AdExchanger. “We’re quite likely to see a similar set of circumstances in the agency business.”

And externally, he’s noted the rise of Amazon – one that will necessitate more investment from WPP.

But Amazon isn’t the only tech company on the ascent.

“This year will be about the rise of the seven big tech companies, regulation and concern about fake news, fraud and brand safety,” Sorrell said.

He sat down with AdExchanger at CES.

AdExchanger: What’s most exciting about Amazon?

MARTIN SORRELL: Amazon is becoming more aggressive in search. Search is the heart of Google. They’re keen to build their platform and content capabilities – not just general content, but sports. [That] brings more balance. But to every stimulus there’s a reaction. It will be very interesting to see what Google and Facebook’s responses will be to that.

Does anything stand out at CES this year as being able to plug gaps at WPP?

Artificial intelligence, virtual reality and machine intelligence are areas we’re looking at intently. We made one or two investments in VR, but I’d like to do more. We’ve done a lot in content and we’ll continue to do so.

Last year you talked about how short-term thinking and cost-cutting initiatives from clients are putting pressure on the agency business. How will WPP circumvent those issues in 2018?

It’s very difficult to circumvent other than to lay out the importance of the longer term.

The balance between Google, Facebook, Amazon, Alibaba and Tencent is shifting. They are like the oil companies of old, the oil being data and AI and voice activated devices. That is going to put a lot of pressure on our clients. There are a lot of categories where the control of data is critically important. Direct relationships will become more important, and brand will become more important. Integrating marketing and sales in an ecommerce world is really important. [We have to] emphasize cutting costs is not the way to win.

These are all external factors. Is there anything you can do to make 2018 a better year?

2018 should be a better year, [with] the winter Olympics, the World Cup and the congressional elections. Then you’ve got synchronous economic growth.

But companies are still very cautious. Packaged goods clients are very cautious. You have hostile bids and activist investors encouraging clients to focus on cost. You can’t control it, but you can point out the limitations of a short-term focus on cost, and the necessity to build brands at a time when brands are under significant pressure. We’ll see how it shakes out.

Investors soured on holding companies this year. What are they getting right or wrong about your business?

If the market overvalues something, it will correct in time. The question people ask from an institutional point of view is, is the duopoly a problem for agencies? I don't think so. Google and Facebook are enablers for agencies, not a disintermediators. They're more friends than enemies.

Is there a threat that they will go directly to your clients and cut you out of the equation?

I can’t see clients willing to give all of their media budgets to a media owner.

About $5 billion [of our investment] goes to Google and $2 billion goes to Facebook. Google is at $100 billion in advertising spend against our $75 billion in total billings. Of that $100 billion, 70% of that is long tail. If we’re [spending] $5 billion with Google and their short tail is $30 billion, that’s roughly equivalent to the shares we have at Fox, Disney, CBS or Viacom. So, I don't accept that they’ve encroached on our relationships. That business that is going direct would be the corner gas station or flower shop. It’s not the big advertisers.

Is in-housing a threat to WPP, or can you capitalize on that trend? It seems like there’s a consultative opportunity there, but is that a long-term business model?

Clients will to find it very difficult to do things internally over a long period of time.

They can’t keep up with technology changes. Most people in our business don’t want to work on one client for the rest of their lives, so keeping people is difficult. It’s something they will experiment with and find it was a mistake in two to three years’ time. Right now, a company that had taken things in house and it didn’t work out is in the process of disgorging it. Which is not a matter of public record, by the way.

You’ve mentioned that you want WPP to be one brand.

One company, I said.

What’s the difference?  Isn’t it one company right now?

Technically, yes. But no. It’s far too fragmented.

A client said to me, “Is it possible to bring together everybody in a seamless operation? I think that’s more of a CEO’s dream than a reality.” But we do consistently do that, for example, with Ford, or with Colgate.

I see clients increasingly wanting to integrate what they do. It irritates me when people say they’re from one agency. It’s like the 12 tribes of Israel. It's not a question of whether you’re a Levi or a Cohen, or a common Israelite like me. You’re a Jew. You should regard yourself as having a functional expertise and provide a totally integrated solution. When you say you’re from tribe A, or tribe B, or tribe C, you put up invisible walls.

Will that result in more consolidation at WPP, or layoffs at the agencies?

Our headcount is pretty constant. That’s one of the implications of technology: Is it going to end up in more jobs or less jobs? But consolidating two businesses, if they grow as a result, may result in more jobs. But the industry has slowed in terms of growth. Do I think there will be more consolidation? Yes. The only question is when.

Will this be the year that there’s consolidation among the holding companies?

Could be. I don't know. There will be further consolidation, but you never give a time frame to a prediction.

This interview has been edited for clarity.