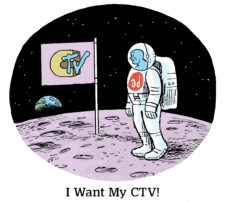 Has social media outgrown the phone? YouTube may be the biggest player in streaming TV, but other social platforms are eager to follow, spurred on by ecommerce dollars. Late last week, Pinterest announced Pinterest TV, a content app that can be downloaded to Apple or Android TV systems. It’s a natural next step for Pinterest, which already has a QVC-for-millennials vibe. The content ranges from food, cooking and fashion to DIY projects and general shopper discovery, with product launches every week, according to the release. Pinners, the company’s name for content creators and influencers, can also create videos for Pinterest TV – as long as they send traffic to the merchants for the eventual purchase. Meanwhile, on Monday, TikTok and Amazon Fire TV unveiled a partnership to bring the viral video feed experience to smart TVs. The TikTok TV app will be available on streaming sticks and smart TVs that support the Amazon Fire TV operating system. Why is Amazon doing this? “No more huddling around a cellphone to see the latest viral video,” according to a Fire TV press release. “Just ask, ‘Alexa, open TikTok.’”

Facebook has alerted advertising and analytics customers that it plans to discontinue the data-driven attribution (DDA) beta program, perhaps the final knell as Facebook rings the bell for advertisers to adjust their measurement practices post-iOS 14. [AdExchanger has more on that.] Facebook removed the general DDA option for advertisers in August, so it was inevitable that the beta program for conversion-based attribution tests would follow suit. “As an alternative, we recommend that advertisers run Conversion Lift studies to obtain high-fidelity estimates of incrementality,” Facebook wrote in a letter seen by AdExchanger that was sent to participants in the soon-to-be former beta program. Facebook is shepherding advertisers to its Conversions API, because it’s a client-server tool that returns at least some identity data to Facebook. Facebook can see an advertiser’s first-party data via an API that can’t be shut down by Apple. Facebook’s terminology is important, too. In the past, data-driven attribution was fueled by Facebook’s unmatched network of site pixels and in-app SDK plug-ins, which logged every sale as it was made. Now, Facebook must rely on modeled data (“to obtain high-fidelity estimates”) and default to “estimates of incrementality” instead of true conversions.

Some of the world’s largest CPG brands – which are among the world’s largest advertisers – have pulled back marketing budgets lately because supply-chain disruptions are keeping products from reaching delivery warehouses and grocery stores. “It’s not wise to drive demand when shelves are bare,” Susan Cantor, CEO of branding firm Sterling Brands, tells The Wall Street Journal. But many big brands are keeping their media plans intact, because they want to remain top of mind despite low supply. After all, demand is still high. Many big brands that pulled back sharply on advertising last year during the height of the pandemic lost market share – and sales – when supply returned and pent-up budgets got spent. But publishers are planning for a soft Q4 compared to a typical holiday season. “The supply-chain challenges just wouldn’t enable us to be able to meet further demand that we would create through our very impactful advertising,” Hershey CEO Michele Buck told investors on an earnings report last week. “It just didn’t make sense.”

Everything you need to know about Coca-Cola’s creative and media agency review. [Adweek]

Here are all the news publications people canceled – and why. [Nieman Lab]

Sportsbooks spend millions on media deals, but publishers should hedge their bets. [Digiday]

Tech promised a grand vision for the future of work, but is anybody buying it? [Protocol]

George Manas has been promoted to global CEO at OMD. [MediaPost]