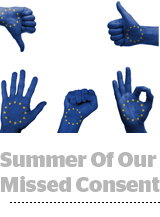 We’ll Do It For You

Sovrn will acquire VigLink, a company that helps independent publishers by auto-inserting referral links into article pages, Mediapost reports. It’s the first purchase for Sovrn since the company announced a $25 million funding round in October and signalled plans to expand beyond ad tech. “Our business is 100% focused on tools and technologies that help publishers – of which advertising is an important one,” Sovrn CEO Walter Knapp told AdExchanger in October. “Advertising is already becoming a decreasing part of our business. And that’s intentional.” He said less than 60% of revenue comes from Sovrn’s exchange. More.

Google, publishers and ad tech companies are finally making progress in coordinating their approaches to collecting consent and using that consent for online advertising. Back in May, Google said that by September it would integrate its GDPR consent technology with the IAB Transparency and Consent Framework (TCF), but it struggled to keep that promise. In meetings last week, Google and other industry stakeholders came closer to a compromise, agreeing on 12 different purposes that user data can be used for in advertising, including a feature specifically for location data, Digiday reports. “Google used to be absent or very disengaged. Now they are one of the most active participants,” according to one participant. Google said it remains committed to integrating its GDPR consent policy with the TCF. More.

Facebook is still struggling to control the flow of user data from its platform. A bug exposed the private photos of up to 6.8 million users to 1,500 developers on its platform between Sept. 13 and 25, The New York Times reports. Facebook identified the issue on Sept. 25 but didn’t notify European officials until November, prompting an investigation into whether Facebook violated a 2011 consent decree and/or GDPR, which gives companies 72 hours to disclose an incident. The Irish Data Protection Commission has opened an inquiry. More. In other Facebook news: Facebook is talking to pay-TV channels like HBO, Starz and Showtime about potential distribution deals on its properties, including Watch and its OTT apps. Read that.