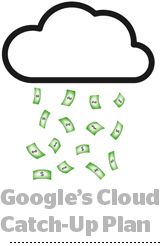 In the United Kingdom, Dentsu Aegis is following a new holding company trend by consolidating and restructuring disparate agencies across media, data and creative. WPP recently merged J. Walter Thompson and Wunderman into one business, Wunderman Thompson, and consolidated VML and Young & Rubicam into VMLY&R. And new marketing holding companies, like You & Mr Jones and S4 Capital, are being assembled without the traditional agency silos. “What it does is, it makes it easier for us to explain and navigate and present our business around the world because I think we have been quite complicated in how it has been organized,” said Euan Jarvie, the holding company’s UK chief executive, to The Drum. “So we are trying to make that simple for ourselves as well as our clients and the market to help understand who does what.” More.

Google will acquire the cloud data analytics company Looker for $2.6 billion. Looker raised $103 million at a $1.6 billion valuation six months ago, so Google is paying a premium, TechCrunch reports. Thomas Kurian, the former Oracle president of product development, took over as CEO of Google Cloud late last year. He’s tasked with spurring market share gains, which Google has failed to achieve in recent years, stuck below 10% share while Amazon and Microsoft took more of the pie. So It’s no surprise to see Kurian’s bold move for Looker, the largest acquisition for Google’s cloud business, following the deal for Alooma, an Israeli cloud-based data integration startup, in February. “We thought it was time to rationalize a new platform for data,” said Looker CEO Frank Bien. “A single place where we could really reconstitute a single view of information and make it available in the enterprise for business purposes.” More.

The average stint for a chief marketing officer dropped from 44 to 43 months last year, according to research from executive search firm Spencer Stuart. The average CEO tenure is 89 months, and financial chiefs average 64 months on the job. “The pressure on CMOs has never been greater,” Greg Welch, a consultant in Spencer Stuart’s marketing practice, told The Wall Street Journal. “Some of it feels unfair.” CMOs are often the first to blame if numbers don’t improve, regardless of external factors, and historically marketers haven’t ascended to the highest posts at large corporations. “Companies are recognizing that marketers have a point of view and can add value,” Welch said. Begging the question: What did they think about marketers before? More.