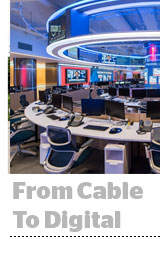 “Search used to be about evergreen content,” Fiedler said. “But Google has been shifting toward supporting breaking news feeds and the most timely results are showing up at the top of the [top stories] carousel.”

Instead of just posting a story and moving on to the next piece, Fox News writers will update it frequently, which keeps a story at the top of the results.

“We have seen strong results from AMP both in terms of traffic and revenue,” Fiedler said.

Real-time updating is particularly effective for events that play out over hours or days, like the primaries or the US summit with North Korea. Headlines are crafted with search in mind.

“The news cycles are extremely rapid in this current administration. They are constantly changing and evolving and moving from one news story to the next,” Fiedler said.

With fresh content, page views rose 28% year over year, to 1.4 billion. The increase is coming both from search as well as Fox News’ engaged core readership.

By increasing the prominence of Fox News in distribution channels like search and investing in more original content, the broadcaster is laying a beachhead for its digital future.

Fox Nation, a direct-to-consumer OTT offering, will launch later this year with exclusive content for the Fox News super-fan. Over the next six to 12 months, Fox News wants to shore up its first-party data by encouraging more readers and viewers to register on the site.

“From Rupert [Murdoch] and [network CEO] Suzanne [Scott] on down, Fox is treating digital with a strong priority,” Fiedler said.