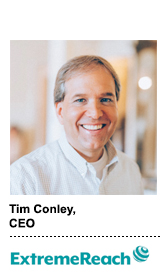 Conley previously served as Extreme Reach’s COO and stepped in to manage the executive team after then-CEO John Roland stepped down in October. Roland had held the position for more than a decade.

Transitioning into his new role has been “seamless,” Conley told AdExchanger, since he and the team have a long-standing working relationship. But not everything will remain status quo. Conley wants to grow and diversify Extreme Reach’s offerings for SSPs.

Extreme Reach has had a few other personnel changes over the last six months. In January, the company brought on Matt Timothy, the former VP and general manager of CBS.com, to serve as CRO. In May, two of Extreme Reach’s regional vice presidents, Maegan Buckler and Brendan Gill, were promoted to senior vice presidents.

Extreme Reach acquired DG’s (now Sizmek’s) TV ad business for $525 million in 2013 and video ad measurement company BrandAds in 2014, both with Roland as CEO. Conley told AdExchanger the company isn’t planning any acquisitions, but that its leaders “continue to look at things in an opportunistic way.”

“Recently, we did a small acquisition of a company called Shots out of London and it’s a product that’s very complementary to our source creative product,” Conley added. “But we don’t have anything [else] specific in mind.”

Roland remains a shareholder and active member on Extreme Reach’s board.