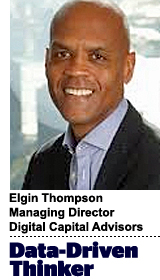 “Data-Driven Thinking“ is written by members of the media community and contains fresh ideas on the digital revolution in media.

For brands, vendor consolidation will come into sharper focus in 2019.

Marketer indigestion and uncertainty surrounding GDPR’s impact on digital ad spending led Forrester to predict a 75% decline in 2019 mar tech investment by VCs. Whether this reflects the oft-hyped “Winter is coming” narrative is debatable, but it certainly signals the end of the beginning.

While the bar has been raised for vendors looking to secure marketing or investment dollars, those factors alone are insufficient to spur mass capitulation or consolidation. There are countervailing forces at play in mar tech.

Heavy is the head that wears the crown

It’s in an entrepreneur’s DNA to bet on herself and outwit those seemingly indomitable incumbents. In 1882, the Standard Oil Trust owned 90% market share of refineries and pipelines. In 2004, Microsoft’s Internet Explorer owned 94% of browser market.

Today, Facebook and Google control nearly 60% of digital ad spending. However, like those before it, regulators in the United States and Europe have the duopoly in their crosshairs. And inspired by notable 2018 exits, such as Qualtrics, Yext, Marketo and Datorama, startups will continue to battle for the crown.

VCs are eternal optimists (within their own portfolios)

Nearly all board meetings of VC-backed companies begin with the same formula written on a whiteboard:

Management has three levers to adjust the two variables: increase revenue, reduce cash expenses or raise capital. A final resort is to merge with a similarly situated mar tech vendor hoping that synergies and scale will enable the combined firm to increase pricing power and be one of the chosen few adopted by marketing departments.

In other words, they can add complexity to the cap table and hope that better days are ahead for an accretive exit.

Right now, you can reach into your wallet, pull out a credit card and launch a mar tech company. With the availability of open-source software and infrastructure-as-a-service enabling platforms to build upon, there are 6,242 mar tech vendors jousting for $44 billion of digital ad spend left over by Google and Facebook.

Adobe, Salesforce and Oracle will continue bolstering their data, sales and marketing clouds.

Given the vast data sets across Salesforce’s clouds, its $800 million purchase of Datorama is an attempt to better extract and harmonize intelligence from disparate data sources. Lastly, in response to brand-safety concerns, Oracle acquired Grapeshot for $400 million to pair with Moat to track fraud, viewability and engagement metrics.

With $1.5 billion in deployable capital, private equity will certainly contribute to the much-needed mar tech consolidation, even if now proves to be the winter of our discontent.