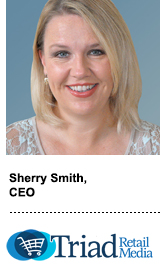 But it raised eyebrows when it was acquired by WPP’s Xaxis in October, as some clients worried that their data would be exposed to Xaxis. WPP mitigates potential conflicts of interest by operating Triad as a standalone entity. Triad also doesn’t sell media to Xaxis, Smith said.

“There’s no conflict of interest,” she said. “We’re not sharing any data with Xaxis, GroupM or WPP.”

Triad is, however, leaning on ad tech expertise from Xaxis to build new products that better service its clients in an ecommerce-first world. It can also tap into WPP data assets like Kantar. Smith declined to go into more detail about what’s on the road map.

As part of WPP, Triad will focus on winning new business with retailers while broadening its remit with clients beyond sales representation to consulting around digital business transformation. Smith also will focus on growing Triad’s business with brands, which it helps place media on ecommerce sites.

Ultimately, Triad sees an opportunity to guide traditional retailers through their online transition, with services from ecommerce strategy to media sales. WPP gives it the scale to support that vision.

“I want to understand our advertisers’ business needs more and what we can do to grow their organizations,” Smith said. “The partnership will enable us to move faster, grow faster and think about how we can better round out our services.”

WPP will benefit from that expertise, too. Triad has 500 employees and brought in about $500 million in revenue in 2015.

“We absolutely, with what we do, rival Amazon,” Smith said. “Amazon is one channel you can win at retail, but there is the [rest of the] ecosystem. There is a place for agencies to be thinking about retail very differently, and we’re helping them with conversations they need to have with advertisers.”