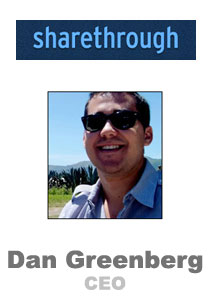 Earlier this month, social media marketer Sharethrough unveiled an social distribution app for viral video discovery called Sharethrough.tv. There's nothing earth-shattering about that, though it does have a different focus on curation than others in the same space. The difference is that Sharethrough.tv is aimed at ad agencies, marketers, producers, press, bloggers and others who are just interested in finding ads. Is there an audience for this kind of app? And how does it enhance Sharethrough's main business? We asked Sharethrough CEO Dan Greenberg to explain how and why this is going to work.

AdExchanger: Sharethrough's been around since online video started getting hot in 2007. What was the idea behind the company?

DG: When I started the company, it was based on this naive vision of brands actually producing good enough quality content to be able to choose who watches it. The tip of the iceberg was viral video back in the day. You probably remember the early days of Ray‑Ban Sunglasses and Nike short films and BMW films, that stuff. Well, it's truly, truly viral, and I think what we saw was that this is the postcard of the future that if brands are going to produce content that is obviously better than most content on YouTube, it doesn't have to be one in a blue moon that it goes viral.

Is it a tough sell to suggest that commercial messages can be as fun and “shareable” as footage of bizarre activity that typically characterizes viral videos?

It actually can be a pretty standardized, pretty scalable strategy for brands, especially in a world when you can't interrupt any of the shitty ads and you can't interrupt any pre‑rolls. How do you get me to spend time with a brand for two minutes? It's not putting a pop‑under. It's not putting the brand to a banner ad. It's actually treating the brand like a content producer.

That was the first step we made. It was 2008 when we made that bet. We said, "Viral is going to be the tip of the iceberg, and we're going to build a company around helping brands distribute viral short form, long form, branded video content and anything beyond that."

Which brings us to Sharethrough.tv. What is it?

Sharethrough.tv is the extension of that whole vision.  We have made it easy to search for the best, most influential and most talked-about branded videos across the web. No one has ever aggregated the best branded videos from the past few years into one searchable database. Our tagline has been, "Content not ads, content not ads." We take the quality branded video content and make it easy for the world to find and share.

People get it intellectually, but sometimes I'm not sure everybody always understands exactly what we're talking about.

How does it extend what Sharethrough is about?

When I say what Sharethrough is, I always say, "Sharethrough's a distribution platform for content‑based ads and video content that people actually like." For example, Old Spice changes the world and all these companies create good content. Case in point, you go to the site, if you actually go there and sit through some of the videos, you realize that this content is better than most content on YouTube because it's high quality, it's produced well, it's super thoughtful, it's high production budget, it's funny, the best creative directors in the world are the ones producing it. And yes, it happens to be from brands, for brands, by brands -- but the content itself is awesome.

So is this just another way of taking the idea of branded entertainment, but instead of product placement, the placement is the product.

I think it's an evolution of branded entertainment. Viral to me, again, is the tip of the iceberg. Then below that iceberg, you've got everything from brand entertainment... through funny TV ads, through short films, through behind‑the‑scenes videos, documentaries, to hoax videos, to mockumentaries, music videos. We have all sorts of categories here.

My general sense is web users avoid marketing. But every once in a while, an ad comes along that makes you happy to share it and watch it over and over. Last week, my wife and I saw a video being shared by friends on Facebook for Pine‑Sol --

Yeah, that Pine‑Sol was hilarious. And yes, it's on Sharethrough.TV.

And I was wondering if that exemplifies what you're talking about?

That Pine‑Sol pranked video was perfect. The production doesn't look like any crazy high production value. But it is produced by a professional company. It's really funny. It's probably like two minutes long. You could cut it into 30 seconds. But if you cut it into 30 seconds and put it on TV, it would be funny, but it wouldn't have the same impact. It wouldn't have the same discovery impact of finding it.

The point of Sharethrough.tv is a) to find videos like that, but b), if I'm a marketer and I see that video, I want to see all the rest of the videos that are produced by the same agency. Actually, if you go to the site and you click on it right now, you can go and find exactly the agency that produced that and all the rest of the content they produced, which is just as cool, just as funny, and just as innovative.

So it’s great that you serve as a showcase for these kinds of ads. But how do you make money? What’s the business model for Sharethrough?

We call ourselves a native video ad company, meaning we help brands who are producing content like this, distribute it through the web through native ad placements. Meaning, not banner ads, not pre‑rolls, not search ads, but native placements that feel like you're part of the content promoted as promoted videos. The same way that YouTube does promoted video and Facebook does watching stories and Twitter does promoted tweets, Sharethrough enables the web, like WordPress and Forbes and all sorts of other publishers, we help them do the same native advertising, but with video on their site.

That's like the core Sharethrough model. We get paid by Coke, Nike, Pepsi, Nestle, Microsoft. They pay us the same way they pay AOL, Google, Yahoo or Microsoft or any other ad company, but instead of distributing their ads, we're distributing their video content‑based ads.

We're a 60-70 person company. We have an app platform, we have an ad server. We have all the analytics. We have exclusive publisher relationships. Our business operates as an ad platform for native video ads.

And how does the launch of Sharethrough.tv fit into that and expand that model?

Sharethrough.tv actually is a separate product. It's a totally free product, and it's more like a database. It's like an IMDB for brand video content where its goal is to be the comprehensive center of the universe for anybody who's interested in brand video content.

There's no monetization strategy here. This is more of a marketing strategy. This is us saying, "Here's a gift to the industry to help catalyze growth. This site now, or this app, is a destination for any marketer who wants to have their finger on the pulse of brand video."

How much data do you gather on this shareable content? Is that where the real value is in what you offer to marketers?

Part of us is about brand distributing their video content through paid data inventory. But it's also about understanding analytics and figuring out which of these placements and which of these users are driving the most sharing and driving the most earned media and driving the most social influence past the first listener. And that's where the social analytics stuff comes in. Our customers log into our dashboard, a Microsoft media planner or a Pine-Sol media player, they come in and they can see exactly what they bought, but also the impact it has form an analytic perspective on the social impact of sharing, reviews, secondary views, and all the generations past that.

Given the deals that have gone down in the past month in the social space – Oracle buying Vitrue, Salesforce purchasing Buddy Media -- does every marketing effort have to have some social currency to it? Or does it just depend on specific goals, like reaching a young demo?

What we're saying is, if I'm not going to click on banner ads, and I'm going to skip pre‑rolls, and if there's no f***ing way you can interrupt me anymore, how do you actually get my attention? The answer is by creating great video content, and then distributing that video content through paid media still, but through native ad placements, not annoying, interruptive ad placements.