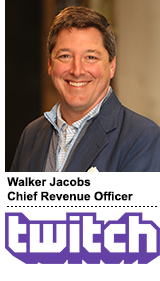 At any given moment, 1 million people are watching Twitch, tuning in to the half a million people who stream themselves playing video games every day.

The audience can be on par with a national cable network, according to a Nielsen study of concurrent viewers conducted in January.

With a strong groundwork laid through its work with entertainment and gaming brands, Twitch is getting serious about its advertising business, which means making inroads in serving advertisers who want to reach young men – not just active gamers.

In November 2018, Twitch brought in Walker Jacobs to serve as Chief Revenue Officer, replacing a CRO who led the company through its first seven years of sales. Jacobs worked in TV early in his career, at Turner, and most recently was COO at Wikia, which attracts an audience similar to Twitch’s. Twitch is hiring rapidly and setting up offices in new markets, like Atlanta, to complement its New York and Los Angeles home bases.

Although Amazon bought the streaming platform in 2014 for $970 million, Twitch runs its advertising business independently from Amazon Advertising.

Jacobs talks to his advertising counterparts at Amazon regularly, but the Twitch business reports to Amazon Web Services Chief Andy Jassy, who doesn’t oversee the advertising business. And Twitch doesn’t offer up coveted Amazon data as part of its sales pitch.

Instead, separate from Jacobs’ role driving ad revenue, Twitch is optimized to drive sales to the ecommerce giant.

Gamers fill their pages with affiliate links to Amazon products, using an extension called Blacksmith, which has helped make Twitch a top referrer of traffic to Amazon, according to SimilarWeb. Amazon’s top traffic driver is Prime Video. Plus, Amazon created Twitch Prime, a gamer-focused version of Amazon Prime.

Jacobs talked to AdExchanger about Twitch’s new advertising initiatives, brand safety and how its community of 500,000 streamers can supplant TV broadcasters.

WALKER JACOBS: It’s no secret that some of the traditional vehicles aren’t as efficient as they used to be in reaching 18- to 34-year-olds. As those [young] audiences migrate to other places, Twitch has been a beneficiary. I believe we can be an incredibly important complement to those traditional vehicles.

Is your advertising connected to Amazon?

We operate the business independent from Amazon. They’ve been supportive of our business, and helping us think through our strategy, and they’ve got a lot of smart advertising and media minds.

How are you integrated with Amazon?

I can’t comment on Amazon’s advertising business, but I can tell you that we have a couple of interesting products that take advantage of the fact that Amazon owns us. We have Blacksmith, which is an extension that overlays on top of the stream. It allows the streamer to link to products in their Amazon store.

We’ve done programs for partners like [P&G’s] Gillette. We had a “Bits for Blades” program, where if the consumer purchased Gillette razors, they were given a code to redeem for bits on Twitch, so they could cheer for their favorite streamers.

Let’s talk about brand safety. When I tuned in to one of Twitch’s top streams, I saw someone who had kidnapped a woman in “Grand Theft Auto” and was making comments that viewers rightly called “creepy” in the chat stream. It bummed me out to see this, and that it took only two minutes to find.

Every game and every streamer and every channel isn’t appropriate for every audience for sure. it’s disappointing you were able to find something you didn’t enjoy, and I hope you turned it off.

When we see people violate our terms of service, we ban them from the service. There have been instances of that happening, and we ban people when that happens. If we see hateful or inappropriate conduct on our site, we have no tolerance for it. We have moderators and auto-moderators that report this stuff. We use AI to help us find it.

Which advertising verticals “get” Twitch – and which are more cautious?

We think of the video game space as the endemic category: console companies, chip companies, computer manufacturers have supported Twitch for a very long time, and have developed best practices for how to launch a new game or console. We have deep partnerships with all of them.

The rest of the marketplace has seen how successful we’ve been reaching young people, and we have diversified into the main consumer categories. We’ve grown business across several categories: CPGs, food and beverage, QSR, retail, automotive. It starts with our audience, and that we have high-quality video that’s non-skippable.

How do streamers make money on Twitch?

Twitch is a platform designed to help streamers build a business for themselves. We want more and more streamers to earn a living by broadcasting on the platform. There are three forms of monetization. Advertising, subscriptions from fans, and bits [tips from fans]. They can do their own sponsorships, and we have our own programs we bring.

We have an [influencer program], Bounty Board. It’s opt-in, which brings a level of authenticity to the ad marketplace. And our streamers love it too; it’s a new form of income.

We do some programmatic. We are primarily a direct sales force. We have teams around the world, offices in the United States, and a diverse set of ad tech we manage.

I primarily view programmatic as an enabling technology vs. a monetization technology. Several of our customers find it a more efficient way to transact. We do business like programmatic guaranteed.

What are you focused on building this year?

It all starts with our commercial video product. It’s live, non-skippable, with a deeply engaged audience that’s leaning in. We have a very low ad density compared to traditional channels, and high impact and high performance. We solve a significant problem in the marketplace, which is how can you more efficiently tell sight, sound and motion [stories] with 18- to 34-year-olds, and the ability to do influencers and custom content.

The 18- to 34-year-old man is considered very ad resistant. How do you navigate that?

Because our platform is live, there are natural times to take a break. We are a platform to help streamers run a business, and give them the tools to go to an ad break at appropriate times. We also have tech called SureStream, which allows us to put advertising directly in the stream, because it evades ad blockers. It’s a server-to-server solution. And we have very, very little display advertising.

Is this vision for Twitch to go beyond gaming?

We are a gaming-first platform. Any content that lends itself to a broadcast, we do on Twitch. There are other categories like cooking, fitness, art and talk shows. I’m excited with what we are doing in the entertainment space with TwitchPresents. On the competitive gaming side, there’s TwitchRivals, which we own and produce in partnership with streamers on our site.