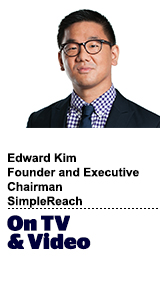 Today’s column is written by Edward Kim, founder and executive chairman at SimpleReach.

Facebook recently announced the launch of IGTV, a hub for long-form, vertical videos that’s accessible from both a new app and the existing Instagram app.

Facebook’s stock soared on the news – Wall Street believes Facebook may finally see a share of Madison Avenue’s TV advertising budgets. YouTube has recently been targeting the same prize. But is the timing right?

There’s no doubt we’ve hit a video engagement tipping point. GroupM forecasts that time spent with digital video will exceed that of TV in 2018, and it’s happening on increasingly more social platforms, apps and connected devices.

IGTV is just the latest wrinkle in video complexity for brands. It’s safe to presume that different watching behavior will emerge in paid and organic content on the platform, as it has already on Instagram, YouTube, Snapchat, Facebook in-feed video and Facebook’s other premium content home, Watch. That list doesn’t include other massively growing and unique video hubs such as Amazon’s Twitch and Musical.ly.

But there are enormous challenges for shifting big-brand budgets from TV to video. Digital video is not a monolith – switching from Instagram to YouTube is not like changing the channel from ABC to NBC. Brands can’t just re-cut existing digital video content – whether it’s repurposed TV ads, digital-native ads or branded content – and plop it in new distribution channels and expect them to be successful.

So, what will make brands decide to shift investment? Let’s look at the pros and cons:

Why big budgets will move online:

Better targeting than TV: One of the core advantages of digital video is the specificity of targeting, both with first-party and third-party data. While targeting using third-party may be limited given privacy concerns, the use of first-party data for video targeting will only get more valuable as the reach across platforms and publishers continues to grow.

(Some) repurposing can help: The growth of long-form channels and over-the-top (OTT) video provide a natural home in the short term for brands to repurpose existing longer-form video content.

Branded content baby steps: Digital native publisher brands like BuzzFeed and Vox have demonstrated fluency in mastering new video formats, such as their recent moves into OTT video on Netflix. Integrated buyouts offer an opportunity for brands to capitalize on new video inventory without investing completely in production.

Lack of standards: Outside of video completions, the different platforms have zero common standards. No one agrees on even what a video “view” is, and it’s only going to fragment more across the platforms. This makes both measuring top-of-funnel basics reach and frequency challenging, let alone trying to measure ROI.

Brand safety and viewability: Managing brand safety with digital video will get worse before it gets better – it’s still a top concern of CMOs, and agencies are so worried about it they’re teaming up to create consortiums to address it. On the viewability front, brands like Adidas are expressing concerns about Facebook in particular; Adidas recently announced it would suspend Facebook video ad buys because it worried that as much as 30% of its spend was wasted.

ROI: Brands such as P&G have pulled back significant amounts of awareness-oriented digital spend over a lack of efficacy, and recent research from Nielsen shows that among digital channels, all types of video are still perceived by CMOs as less important than social and search.

Given all the trade-offs, I believe the most likely scenario in the near term is an increasing divergence of strategies between brands. Some will make higher-risk, significant budgetary shifts to more digital video and reap outsized returns; others will stay on the sidelines. The diverging strategies will result in little near-term change in the top-line spend numbers, but in the medium term, there will be notable shifts.

This path forward is going to be led by CMOs who successfully mix and match best-of-breed creative and execution capabilities while investing in tools and processes to mitigate risk, such as Heineken’s in-housing of ad verification.

I believe we will see more brands rejecting the agency-of-record model and working with specialist agencies on newer video formats. It’s already happening in other content formats, such as JPMorgan Chase choosing VaynerMedia as its voice agency.

It’s just a matter of time before digital video captures the budgets of the world’s largest television advertisers — the trend curve is only moving in one direction.