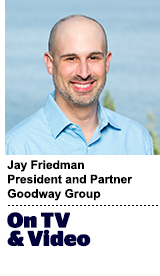 As anyone who sits through an upfront discussion with a TV rep will tell you, there are two kinds of annual rate increases.

How has TV sustained these cost-per-point (CPP) and cost-per-thousand-impressions (CPM) growth rates that constantly grow faster than inflation? Will it continue? I think so, although for different reasons going forward than in the past.

Time spent watching live-plus-time-shifted TV has steadily fallen since 2010. Sure, that lost time has been replaced and even augmented by video on other devices, but six-second buffer ads and skippable video don’t have the same impact of a 30-second, full-screen, uninterrupted ad right in the middle of desirable content. Just as man-made diamonds have nearly met the quality of natural diamonds and are now plentiful, there is no substitute for the original thing. Natural diamond prices continue to rise, as do the costs to reach consumers with a 30-second, uninterrupted full-screen TV ad.

What about ad-supported streaming? These are great opportunities, but the supply is not the same. Tubi TV features approximately nine minutes of ads per hour compared to 12-14 minutes or more on cable television.

And, as older generations are supplanted by today’s 18- to 24-year-old demographics, the TV ad supply problem only gets worse. So, are we heading to a time where TV CPMs hit $250, or even $1,000? I don’t think so, and there are two specific market forces that will prevent this.

First, while a 30-second TV ad does things a six-second ad can’t do as well, there is a limit to how much more beneficial a 30-second ad is compared to other ad units. We can now measure exactly how much more impactful certain ad units are than others. At some point, the math breaks for the 30-second spot and becomes favorable to other video ads, or even out-of-home and other non-video units.

Second, we still actually don’t know how many people are – or, perhaps more appropriately, are not – watching TV and the accompanying ads. The antiquated, panel-based measurement system we use to measure traditional TV doesn’t provide statistically significant data in many local markets across most channels. Ratings still include the live audience, plus the viewers that watch the TV program three or seven days after the air date, which is frankly silly. Many people who time-shift their TV don’t sit through the ads.

All this is to say that it’s possible or even likely that many TV advertisers’ CPMs today are already much higher than they believe. New TV measurement providers’ technology will accelerate and improve our understanding of real TV viewership, and I believe the ill will created by the discovery of actual viewership data combined with an analytical approach to the value of TV advertising will have an adverse effect on the demand for 30-second TV spots.

These market forces will make the next few years interesting. Add in innovation in the creation of memorable brand messaging with ad units other than the 30-second spot, and I see a more analytical and efficient path for advertisers in the next 10 years, despite higher prices for the fewer and fewer 30-second spots actually being watched.