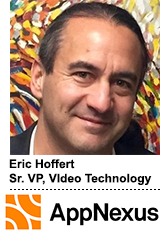 AppNexus launched the first video advertising product for its demand-side platform (DSP) in late 2015. Over the next two years it built out its video offering to include a supply-side platform (SSP) solution, a video ad server, a video header bidding product and a connected-TV marketplace.

With its acquisition by AT&T expected to close later this year, AppNexus will take a more prominent role in converging online video and TV advertising, with a chance to blaze a new trail for programmatic.

For more than 10 years tech companies have tried to converge online video and TV advertising, but it wasn’t until the past year that broadcasters and the programmatic industry could really seize the opportunity, said Eric Hoffert, AppNexus’ senior VP of video technology.

“The TV industry especially, if you look at what they’re doing around advanced targeting and introducing KPIs, are taking this platform approach now,” he said, where buyers can view inventory across suppliers and incorporate data for targeting and attribution.

AdExchanger spoke with Hoffert about AppNexus’ video advertising plans and its opportunity as a part of AT&T’s Advertising and Analytics group.

ERIC HOFFERT: CTV supply is an interesting position right now because ad-free networks like Netflix, Amazon Prime and HBO have so much of the attention time there. For us the category falls into three kinds of supply.

The first category is streaming TV services – think DirecTV Now, Sling or Hulu TV – which probably form a large chunk of the scale. If you add those up, you start to get into the 5 million- to 10 million-subscriber range.

Then there are direct broadcaster apps like A+E, CBS, CNN, etc.

And third is a new class of CTV apps that are potentially disruptive. That would be a Tubi or Pluto TV, which are interesting because they’re services that are free, ad-supported streaming TV.

How do you think about bridging the programmatic world with broadcasters and TV advertisers who have very different mindsets and standards?

If you consider the progress with Ads.txt and blacklisting or partnerships like we have with White Ops to evaluate every unit of inventory we look at, the industry as a whole has made great strides on quality. We see a lot more direct relationships with publishers, for video campaigns in particular. Essentially all of our CTV deals are through private marketplaces.

And the flip side of this in the TV industry isn’t real-time bidding environments. Being able to layer on first-party and third-party data is at the core of programmatic, and you see that with the OpenAP initiative with broadcasters like Fox, Viacom and NBC layering in that data and collaborating with more of an open ecosystem mentality.

OpenAP in and of itself isn’t a big change for AppNexus, but the ability to add data and targeting to TV is critical development for AppNexus.

How strong is CTV traction on the buy side? And what kinds of advertisers are driving adoption?

The first wave of adoption is programmatic video buyers who are active across mobile and desktop and want to move into connected TV.

Following them are the large brands who have done enormous amounts of television and realize they need this to get truly unduplicated reach.

For the big CPG types, a meaningful portion of the demographic doesn’t watch pay TV anymore. It’s incremental audience that just isn’t watching content where those ads are showing, so if you’re a brand that wants all age ranges, then connected TV is getting to an inflection point where it has to be in your media mix.