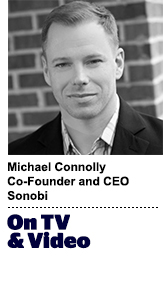 Today’s column is written by Michael Connolly, co-founder and CEO at Sonobi.

So, a group of guys is sitting down to watch the hockey playoffs on TV, and a Maybelline commercial pops up.

Even if the cosmetics advertisement is entertaining, does it have an impact on the guys who just watched it? The brand paid a considerable amount of money to reach millions of consumers, but it didn’t reach all the right ones.

The challenge with traditional TV is that it is insensitive. In contrast, streaming-services companies (such as Netflix, Hulu and Roku), smart TVs and online sports-streaming platforms (such as NFL Game Pass) have a much better understanding of the people who are watching their shows or games.

As such, they are the driving force behind recent attempts to rethink how we consume content on television. With advertising, this means moving away from presenting one ad to everyone and toward tailoring ads to the interests and demographics of the viewer and showing different, more relevant advertisements to distinct groups of people.

Despite such efforts to redesign how we capture audiences, traditional TV still mostly uses the tried-and-true one-to-many approach, and it continues to provide advertisers with massive reach and viewability. As media companies struggle to devise new metrics and numbers to define the true audience for media content, advertisers look for methods that lend themselves to targeting audiences in a one-to-one setting, rather than using the one-to-many technique.

Though the goal is for the viewer to experience an ad that feels customized for them, achieving one-to-one targeting in TV is challenging. How do you deliver that specific ad to the one person who needs to see it without being invasive? What information should be collected? And once the information is available, what is the best way to analyze it? At what cost? Are consumers ready for one-to-one targeting?

For individualized TV advertising to become a reality we need two key components: addressability and ad-serving technology. Addressability – to really know whom we are addressing – requires a unique way to identify a viewer and an identification that is persistent. Currently, there isn’t massive scale on these two aspects, though smart TVs and streaming services are moving in this direction. If a person must log in to his or her account to watch TV, then they are targetable.

Besides addressability, technology also needs to mature to be able to manage the complexity of individualized TV advertising. In digital, we have the ad server. Interacting with it via an API is mature. In television, we don’t have a comparable standardized tech tool. Even if addressability was available at a large scale, the process of offering one-to-one advertising would still be a very manual effort in the last mile. This is not consistent with scalability and automation.

Once we have the ability to identify a person watching a particular piece of content on TV, and we have standardization for how to deliver an ad to them, we will see addressable TV become a viable option.

At this point, it is really hard to provide a time frame for when one-to-one TV targeting will be available at a large scale. Developing the underlying technology requires a coordinated effort from many parties, such as big broadcasters, cable companies, networks and ad tech.