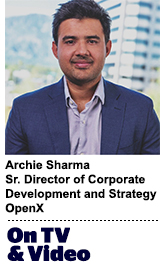 Today’s column is written by Archie Sharma, senior director of corporate development and strategy at OpenX.

Cable companies have historically dominated the TV advertising market, and through M&A over the last decade the industry is now led by a few TV giants – AT&T, Verizon, Comcast and Charter – that control most TV advertising. And, with AT&T’s acquisitions of DirecTV and Time Warner, their power is even clearer.

These companies have sustained partnerships with top TV networks and their massive audiences, allowing advertisers to easily reach an array of consumers at scale. Until recently.

Today, Apple TV, Roku and other over-the-top (OTT) devices have shattered the seemingly impenetrable TV ecosystem and ushered in a rare era of opportunity in TV advertising. More than 55% of the US population – 181.5 million people – use connected TVs at least once per month, according to eMarketer. This wave of innovation introduced fragmentation that has fundamentally changed how advertisers can reach consumers via TV.

Understanding this new ecosystem will be key for advertisers who want to take advantage of the blossoming connected TV opportunity and tap into the nearly $70 billion market. I see several profound areas of fragmentation that will begin to fit together as advertisers reconstruct their strategies.

In the past, finding audiences in bulk was easy. Consumers accessed TV content through one of five major cable companies, and nearly all their attention was consolidated to the top 50 TV networks. Consumer time was commoditized, as advertisers valued aggregate consumers watching a single show equally, based on Nielsen ratings, and could reach them through a few upfront deals and cable networks.

As a result, the value of each consumer has increased. Consumers are targetable on TV in a way never possible before, through a mix of devices, content and behavioral attributes. Over time, advertisers will be able to leverage this data to build a complete understanding of consumer behavior and adjust their “TV” ad strategy from bulk audience buys to targeting on an impression-by-impression basis. The decommoditization of consumer time spent on TV has begun.

Delivering a better user experience at a much better price, IP-enabled devices (or CTV devices) such as Apple TV and Roku have contributed to the decommoditization of the market by unbundling content, devices and services. However, this has introduced another layer of complexity for advertisers.

Deploying effective audience targeting in TV has traditionally been difficult. Cable companies leveraged household information from set-top boxes to offer advertisers targeting options, and broadcasters and TV networks were forced to rely on either cable companies, third parties or the upfronts to catch advertiser interest. With targeting data under Big Cable’s lock and key, addressable advertising for TV networks was a major challenge that left advertisers cuffed to valuing audiences based on Nielsen content ratings.

CTV devices now offer TV broadcasters a viable alternative for collecting and sharing audience data. This means instead of working with limited partners, advertisers are being courted by an ever-growing number of CTV providers for their business. Learning from traditional TV, CTV devices will battle it out for market share and eventually consolidate around a few top providers.

Beyond consumers and devices, the technology powering CTV has also been a point of major disruption. Several traditional TV technology players have tried and failed to pivot and take advantage of CTV.

This is largely because CTV more directly mirrors the technical systems in the digital space, rather than the linear systems of today’s TV ecosystem, which has given emerging digital technology companies a distinct advantage.

One shining example is The Trade Desk, which grew its programmatic TV business in the first quarter of 2018 by 2,000% year over year.

TV advertising’s appealing attributes – large screens, massive scale and storytelling capabilities – all still exist, but there is uncertainty in this new climate. Buying media and measuring results on TV didn’t change for decades, but we’ve now seen more disruption in the last five years than in the previous 50.

As CTV continues to capture more market share over the next two to three years, fragmentation will continue and usher in a consolidation cycle that will help extract greater efficiencies from the system. While fragmentation is causing advertisers short-term pain, understanding today’s landscape and where it’s going can set them up for long-term success.