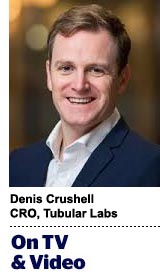 With the maturity of social media platforms into audience attention juggernauts, companies like Netflix, ViacomCBS, Warner Media and NBCUniversal (among others) have all invested heavily in social video marketing efforts to boost TV tune-in and streaming service subscriptions. This trend accelerated in 2020 as the pandemic uprooted the pay TV business.  According to eMarketer, more than 6 million US households will cut cable this year – the most subscribers ever in a single year.

But while this attrition illustrates a poor picture for the future of the traditional pay TV business, more households still have a cable subscription than not.

Further, streaming services need to get more creative about how they acquire customers.

Netflix, long the industry leader, may have hit its ceiling for growth, signing up 2.2 million new paid subscribers in Q3 2020 – its weakest quarter since 2016. Meanwhile, Disney’s gone full bundle and NBCU’s Peacock rollout has been geared toward free with the potential to convert paid subscribers. HBO Max has gone so far as to include the would-be blockbuster Wonder Woman: 1984 free of charge for subscribers. It also plans to release its entire 2021 theatrical slate on the streaming service.

What does this all mean?

These dynamics keep shifting rapidly. But there are ways to differentiate a TV offering just the same. Below are some key considerations for media companies as we enter 2021 – many of which could dictate which ones rise and fall during what will be a transformative year for TV.

A few years ago, major networks were laggards in terms of uploading videos to YouTube and Facebook. Now, we’re seeing networks owned by the likes of Disney, WarnerMedia and ViacomCBS garner hundreds of millions of unique views per month. Expect every media company selling a subscription – from streaming platforms to media conglomerates and TV platforms – to ramp up its social video marketing, and not just in terms of marketing and total uploads, but sponsored posts as well.

Further, differentiating content in a sea of similar videos becomes crucial. Maybe your audience prefers a lot of short-form videos, or maybe instead it prefers a handful of longer trailers. Viewing data from social platforms can be most helpful when making editorial decisions, and allows creators to give audiences exactly what it wants to watch.

This one is already happening. The success of niche content has been proliferating the past several years, and we’ve seen audiences swell around interest-based content, whether it be fitness, gaming, kids, you name it…

While larger streaming services appeal to broader audiences overall, they can still appeal to niche audiences with content that resonates. Disney+ has Star Wars and Marvel content via previous acquisitions, plus National Geographic’s library of nature content as well. Netflix and Amazon have their own rafts of kids-focused programming aside from just Moonbug. Anime content has grown on services like Crunchyroll, and that’s inspired anime content acquisitions for larger services as well. These are windows into niches that can pay big dividends as beacons to like-minded viewers. Social media becomes a dedicated community to discuss that content on a video-by-video basis.

HBO, Netflix and Disney Plus each have very different programming release strategies, and their subsequent show promotions vary from supporting the entire series to individual movie events.

Since YouTube and Facebook are the two biggest AVOD (ad-supported video on demand) platforms in the world, there’s no greater sandbox in which to test, refine and, if necessary, completely alter streaming distribution strategies based on what the intended audience responds to on social video. Measuring likes and comments only scratches the surface, however. Digging deeper into TV-like metrics including watch time and unique viewers on social lets you make better decisions around streaming content.

Subscription churn is always right around the corner, but media companies can avoid that by becoming even savvier marketers around content. With more measurement tools at their disposal than ever before, these conglomerates don’t have to be intimidated by the shifts 2021 will inevitably bring. Instead, they can, and should, embrace them as part of their business model.