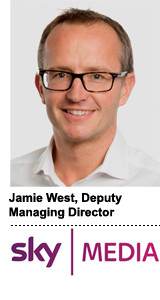 British broadcasting and telecom giant Sky is building for a future where digital and programmatic TV play on the same court.

To do so, Sky, amid a $14.1 billion takeover by Twenty-First Century Fox, is investing in new media opportunities and ramping up on ad tech.

And Sky Media, the pay-TV provider’s media and advertising arm, is expanding its programmatic platform, Sky Audio Visual Exchange (AVX), from owned-and-operated platforms to include linear and video-on-demand inventory.

“We’re starting with our IP-enabled apps and services and will ultimately move across all of the touchpoints Sky trades on, including addressable TV,” said Jamie West, deputy managing director and group director of advanced TV for Sky Media. “It’s really a step forward in automation to enable system-to-system integration between Sky, brands and agencies.”

Sky’s gargantuan reach in the UK market is a competitive differentiator – and why it’s so advanced in advertising.

In the US, most addressable minutes are locked up in two-minute-per-hour blocks of programming allotted to MVPDs.

That model differs from Sky’s setup, where almost every single ad break and spot is monetizable via Sky’s addressable ad platform, Sky AdSmart.

“The only real exception is live sports, and that’s principally a technical issue where certain sports like tennis cut the ad breaks at different times,” West said. “In terms of [addressable] scale, we’re in excess of 7 million households out of our 12 million [households and] are still looking to grow that.”

In addition to its addressable ad offering, Sky is doubling down on merging insights for TV-to-digital viewing behavior by collecting second-by-second viewing data on Sky properties through a platform called SkyAdvance.

“That alliance allows us to serve ads either on the Sky platform or off-network to customers or noncustomers who have or have not viewed an ad, program or sponsorship,” West said.

Most advertisers use SkyAdvance to perform reach extension or cap ad frequency, which improves the cadence of messaging and creative.

Strategically, Sky Media is shifting from its legacy as a media sales house working mostly with agencies to more of a direct partner to brands and agencies.

Because of Sky’s relationship with subscribers, it has access to demographic data via its subscribers’ names and email addresses.

That anonymized information backs into a viewing panel, which bolsters the effectiveness of Sky’s media.

“Where customers have transactional interaction data, we can prove or analyze the efficacy of campaigns that run on and off the Sky platform,” West said. “Combined with our data analytics, we can create planning tools for brands and agencies based on our device graph to enable brands to understand their consumers’ cross-screen behavior.”