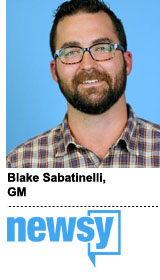 Newsy started life as a desktop play. But now the digital video network, purchased by the E.W. Scripps Company in 2013, derives most of its traffic from over-the-top (OTT) devices as buyers begin to warm up to the channel.

Marketers are increasingly willing to invest in OTT not just as a testing ground but as a significant area of spend, said Newsy GM Blake Sabatinelli, who noted that budgets are on the uptick.

A test budget might be just 3% or 4% of the overall budget, but OTT is now composing as much as 40% to 50% of budgets as marketers become “more comfortable with the fact that OTT is television … just with better data and targeting,” Sabatinelli said.

Buyers are also getting better at augmenting connected TV as part of their broader TV buys, even if measurement is still only half-baked.

Newsy has rolled out several data products to capitalize on the new demand, including an audience targeting solution called Newsy Plus and an analytics system that links on-demand and linear viewing.

BLAKE SABATINELLI: We were considered Scripps’ digital video network for a long time because we were in the business of distributing video on the web. We still distribute on the web. But increasingly, it’s [becoming] a really small part of our business. We’re a majority OTT company at this point, which is where we see the biggest upside and growth in digital video.

How are OTT audiences different?

You don’t just have a large audience; you have a huge swath of people between 25 and 44 – a big advertiser sweet spot. We’ve now focused on millennials in their early 30s and have thankfully been able to attract that audience.

That’s much different than what we’d been getting a couple of years ago when we were focusing our distribution on mobile news websites. [Our] focus on OTT has been huge for us, both on Roku and Apple TV, with [big] upside on platforms like Sling TV. We planted our flag in the OTT field about 18 months ago, and we’re starting to see those investments pay off.

How is Newsy capitalizing on live video?

We created a product – Newsy Live – and built out an infrastructure around it. Live viewing brings huge amounts of scale because it’s not a one-to-one ad call. It’s one-to-many, because if you have 10,000 people watching on one ad break, you’re essentially making 10,000 concurrent calls.

That brings an incredible amount of opportunity to companies like Newsy, which are very data-focused. We’ve been very active in the programmatic space, especially in the linear side of our business. It presents us with opportunities, like if someone wants to dynamically buy a time slot or audience that you couldn’t access in traditional television. It provides more options for people to segment their data, compared to a scatter buy, which doesn’t get you that same targeting capability.

Do you have a data product?

That would be Newsy Plus. We partnered with Tru Optik as our DMP. We’re starting to use that data across all our platforms and have seen good initial results from our first few campaigns. As we worked with other DMPs, the fact that a lot of them were SDK-based made it very challenging in the connected TV space, whereas Tru Optik works more on the IP level, which makes it easier to integrate and scale across multiple channels.

How are you using viewership information to improve content and advertiser decisions?

We’re fortunate to work within the E.W. Scripps Company because they have an enterprise analytics team, and we’re halfway through a project now where we’ve built a really robust dashboard, which looks at broad viewership data across our footprint.

The next thing we want to do is use all that rich metadata we have as an on-demand video company and a digitally native company and try to tie it to live viewership data, to predict what the outcome of a 15-minute program block at 4 p.m. would be, based on the nature of the content and past performance indicators.

Potentially. We still operate under that startup mentality, and we’ve been very focused on data from the start, so it makes us a good test bed. I can’t speak for Scripps as a whole, but it [has] 33 TV stations, and there are a lot of opportunities to [merge] insights.

Are you monetizing programmatically?

We actually moved into direct sales in the last 12 months, which is great because it relieves pressure on our programmatic side, [ensuring] we do not have to fill a huge amount of inventory that way. This year, we’ve seen a [large] influx of dollars into the market vs. last year, when people only dabbled a little bit.

We have a sales team in New York that’s busy, and there’s a huge amount of growth on the OTT and programmatic side of the business, both with Deal ID and in PMPs or even on the open market.

The [OTT] ad market was really tepid for 18 months or so, but this year, there’s an influx of people moving money into the space – and that’s ahead of Nielsen measurement even being available across all platforms.