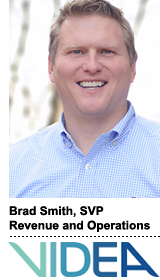 With addressable TV predicted to grow 65.8% this year to reach $1.26 billion in ad spend, local TV providers will be among the channel’s biggest beneficiaries.

On the flip side, agencies are investing earlier and more often.

“We are seeing some big wins in terms of agencies that aren’t just buying volume in the fourth quarter, but are starting to push volume through for 2018,” said Brad Smith, SVP of revenue and operations for Videa.

Yet, despite new buyer investment, executing and measuring an addressable TV ad buy is still a work in progress.

Smith spoke with AdExchanger about the current state of addressable TV.

AdExchanger: What’s the biggest challenge in local addressable buys as it stands today?

BRAD SMITH: Fragmentation and scale are obviously critical to build bigger audiences with more efficiency. Second, there needs to be more simplicity in the way the buy side reserves inventory and how the sell side fulfills those orders.

Then, when you look at traditional local buying, there are a lot of pain points in tracking. If [a marketer] buys an audience outside of [Nielsen’s] Local People Meter, it might take a month to get demographics back around ratings, and the same is true with comScore.

Can data be applied to local addressable TV the way it is for national ad buys?

Not yet. If you are buying in local in 210 DMAs, there are only three or four data sets that can be applied, and one of those data sources is the paper diaries, which are beginning to go away.

Nationally, you have a much larger sample [on which] you can apply data. The second part is moving forward and applying digital and offline data to local television. But I think we will see people bringing more robust data to a much more micro audience.

Where are there challenges with frequency capping in addressable ad buys?

The challenge right now when you go for that super precise addressable audience is that you’re hypertargeting, but you’re not building reach in the way marketers often want to. That means you run the risk of oversaturating on frequency in a way that goes negative very quickly.

Addressable is a budding marketplace, and the amount of available inventory is going through the roof, but there’s still a lot of work to be done to ensure that if I’m a local broadcaster, I have the means to get the right ad to the right household at the right time.

Will auction-based TV buys ever be a reality?

I think there are certain segments of television inventory where that might make sense, but it’s a minority. Macy’s right now is pulling together their campaigns for the Christmas season. What they’re not going to do is come in the day before Thanksgiving and try to buy all their inventory in an RTB, last-minute environment.

They want the safety, security and planning aspect where they can layer in their advertising – TV, digital or whatever – over six weeks to build to a crescendo to try to drive you to stores. In that context, sure. They may want to lever up and target a certain audience or do some last-minute adjustments, but the private marketplace relationship still holds a lot of value.

Where are the most untapped pockets of addressable TV inventory?

When you look at skinny bundles, a significant portion of inventory will go toward being addressable.

And local broadcast has a lot of opportunity. A great example is with Hurricane Harvey, where a local TV station in Houston still broadcasted live throughout the storm, which was a huge opportunity to continue to grow the relationship with viewers, while building strong ad streams, whether linear or addressable. We saw the same with Hurricane Irma, where national networks have been picking up a Miami station’s local news feed. That’s the power of local broadcast.