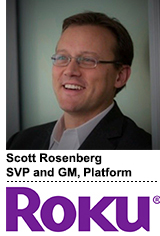 Just a few years ago, Roku focused on getting devices into as many households as possible. But at a certain point, Roku realized it had to do more to innovate and stay relevant in the over-the-top (OTT) battleground for ad dollars.

Since then Roku has become an advertising titan. In its Q2 earnings call last week, the company revealed unprecedented growth from its advertising and subscription-based services.

AdExchanger: What was Roku like when you started out there?

SCOTT ROSENBERG: I joined about six years ago, and I was part of what became a three-person media team at the time. It was an early incarnation of our platform business. Roku has always planned to build boxes at modest profit, use those devices as a way to acquire users and then monetize them after they took their devices home.

But during the early years of Roku, we didn’t quite have the scale or level of engagement to build out what eventually became our platform business. In late 2012 when I joined, we had about 3 [million] to 4 million active accounts – we recently crossed 22 million active accounts in this quarter – but we were leading the market enough at the time that we set about changing our content deals.

We wanted to seek a fairer exchange with our content partners. Our belief was we were creating value for them by helping them reach consumers who were cutting and shaving the cord, and Roku would participate in the success of the monetization our partners achieved on our platform.

What was the first ad business at Roku?

Around the time I joined we got clearer about how we wrote distribution deals, how we negotiated for revenue shares, etc. We launched what was really our first ad business, a promotional ad business, which we now call “audience development.” It was tools to help providers of channels on our platform grow installs and grow their audience.

After we got [our TV business] scaling, we started to observe the growth of free ad-supported content. In those early days it was services like Crackle, Vevo, TV everywhere apps. Ad-supported viewership really accelerated. Most Roku users already have a Netflix subscription or a Hulu or [Amazon] Prime subscription. As consumers move more of their TV time to their Roku device, of course they’re expanding their use of those services.

How did all this scaling change Roku’s ad strategy?

In the 2014 to 2017 timeframe, we really put in motion a strategy that has two parts to it. One was to build the tech platform to enable what we felt TV advertising could become. TV, somewhat ironically, is the $70 billion grain field that hasn’t been truly digitized or benefited from the same advances that have occurred in other digital media, whether it’s targeting, advanced measurement or interactivity.

In our platform on OTT, we have the opportunity to deliver on that promise. So, we very quickly put in motion a strategy to build an ad tech platform to enable advanced advertising.

We launched several products after that framework, which is effectively an ad SDK, an interoperable system that helps publishers do interactivity through targeting. To this day, that remains a critical differentiator and a key corner of our value proposition in the ad business.

The second thing we did was launch our own media sales effort. In our negotiations with publishers, similar to how an MVPD works with a cable operator, we elected to negotiate for inventory rights for access to their video advertising slots or impressions so that we could then aggregate that across hundreds and hundreds of apps.

How did advertising play a role in your recently announced Q2 earnings?

In Q2, the company as a whole did just shy of $160 million in revenue. The platform business, what I run, was about $90 million. Last quarter and this quarter were the first time where platform revenue exceeded hardware revenues.

What are some new ad tech products Roku’s working on?

Well, we have the new Audience Marketplace. That’s a big area where we are investing to help our new partners Viacom, Fox, Turner and more activate and scale their businesses. The Roku Channel is a big contributor of ad volume for us already, but it’s also a place where we’re doing a lot of innovation around sponsorships.

One thing that brands tell us loudly and clearly is that while they love 15- and 30-second spots, they’re also looking for new ways to reach a more sophisticated TV viewer. And one of the things we’ve done since the early days of our ad business is create ways for brands to sponsor content on our platforms. That could be something like Microsoft sponsoring the unlock of a season of “Ray Donovan” on Showtime or another brand giving you a buy one, get one free. In the Roku Channel, we had National Streaming Day in May, where we had content partners unlock content that otherwise would be paid and was brought to you by a variety of brands.

We find that kind of innovation really important because it creates a high level of affinity for the content. These brands love to cozy up against really premium content, and sometimes it’s content like “Billions,” which otherwise has no advertising. And we think it’s a great value for consumers, and ultimately, it’s a really high-profile ad vehicle for a brand that breaks through the clutter.

We’ve also been beta testing with clients the ability to do interactive overlays on linear ads. Because we’ve got smart TVs and the ability to sense what ad is on screen, we can allow users to click on that ad and, for example, if it’s an auto ad, to see where the closest dealer is.