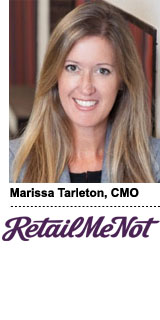 After years of investing in brand-building tactics on TV, RetailMeNot, which was acquired for $630 million by payment processor Harland Clarke and went private in April, is moving its working media budget into digital video.

That’s not to say RetailMeNot is entirely abandoning TV, since the broadcast medium drives brand lift during periods when there are more companies competing for share of voice. (For instance, it might make sense to reinvest in an integrated approach including digital, TV and radio, as RetailMeNot did during last holiday season.)

But for now, the shopping deal aggregator is doubling down on digital as it seeks to reach two key demographics in the build-up to back-to-school shopping. First are millennial moms who use their phones to search, and the second are slightly older moms or “household enthusiasts” who use Facebook.

“We’ve put all our eggs in one basket with a heavy focus on digital video in particular,” said Marissa Tarleton, the CMO of RetailMeNot.

RetailMeNot is dedicating about 96% of its working media budget to digital and mobile activations, with the remaining 4% going to channels such as email, according to Tarleton.

RetailMeNot’s digital video strategy intends to engage its two core segments with a series of videos featuring model and actress Brooklyn Decker and the hashtag #DealBrag encouraging consumers to share their shopping deals via social.

“When you have a target that’s that discrete, the digital platform is so much more effective and efficient for you,” Tarleton said.  “Video not only serves as a performance media vehicle for you, but a brand-building medium.”

Although RetailMeNot declined to share specifics, it says its video ad spend is up 400% YoY over Q3 of last year.  In recent tests, the brand has seen video generate three times the number of site visits than static display or banner ads, both on in-feed social video and paid 15- and 30-second video spots on the open web.

To determine the success of its video activations, RetailMeNot tends to measure standard KPIs like views, but also considers their “shareability” in social, as well as conversions based on the number of site and app visits it drives via videos with a call to action.

“We’ve found the need to get a lot more creative [with messaging] to ensure we’re not just hitting reach, but proper frequency, not to use outdated media terms,” Tarleton said. “And digital video will be a huge part of that strategy.”

Like Gilt Groupe and Groupon, which both tried to evolve beyond flash sales and deep discounting to emphasize discovery, RetailMeNot has attempted to shift from just generating traffic and leads for merchant partners to “something more omnichannel,” as Tarleton put it.

RetailMeNot’s ambitious goal is to link digital exposures to in-store purchases, which gives the company’s services more value higher up in the funnel.

With that shift, it hopes to not only drive lower-funnel discounts and promotional offers, but also aid merchants in brand-building through video content and an expansion into new categories beyond coupons.

“With our app, we started to solve a problem most retailers have, which is not just capturing online traffic, but capturing the mobile user and driving them in-store,” she said. “I think retailers are thinking more strategically about personalization and location in mobile.”