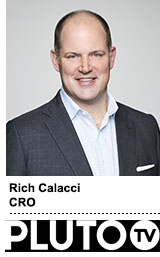 Pluto TV is the anti-Netflix.

It’s free and ad-supported. Users scroll through channels and watch whatever show is already playing, replicating the channel surfing that’s a hallmark of old-fashioned TV watching.

Viacom spent $340 million in cash to acquire Pluto TV in January, validating the concept and its audience.

The deal felt like “Cinderella getting to set foot in the ballroom,” said Rich Calacci, Pluto TV’s CRO and a former executive at Bleacher Report.

The strategic acquisition gave Viacom a scaled direct-to-consumer product. Most of its TV competitors already offer one, including CBS All Access, HBO GO or (forthcoming) Disney+.

The acquisition also “elevates our profile across the media community,” Calacci said.

Ignoring Pluto TV is no longer an option. “Every media buyer needs to have a POV on Pluto,” he said.

On the sales side, how Pluto TV’s “SWAT team-sized salesforce” will work with Viacom’s massive sales organization hasn’t been decided.

Building a sales force from scratch did have its upsides.

Unlike established companies worried about undermining direct sales, Pluto TV embraced programmatic. Its sales team couldn’t possibly sell all inventory via IOs anyway, and the Pluto team saw no reason not to serve advertisers however they wanted to buy.

Pluto TV uses FreeWheel as its ad server and StickyAds as its preferred SSP, along with SpotX and Telaria, a tech stack familiar to programmatic buyers.

Beside embracing programmatic, Pluto TV also hired people that speak both the languages of digital and TV so they could serve a greater range of buyers. TV buyers speak the language of fast, effective reach and want “gap insurance” for demos they can’t reach on TV. Digital buyers want attribution and targeting, Calacci said.

Pluto TV is also running advertising campaigns that test a “TV” style of buying against a “digital” style of targeting. A brand that wanted to reach people who live in apartments, for example, ran a control group for its campaign where it bought a simple demo-targeted buy. The results still haven’t come in.

While broadcasters fret over the complexities of chopping up linear inventory in a more audience-targeted world, Pluto TV sees itself more akin to a local TV seller that can demand higher prices because it controls a scarce, highly targeted resource. Pluto TV not only gladly serves ads to small, targeted groups of viewers, it also brings all those advertising dollars together to create a unified and much more competitive market.

“All of a sudden you have thousands of local and national advertisers competing for inventory. While I knew this to be true from my TV background, I hadn’t seen this realized,” Calacci said.

Pandora and Spotify create the same dynamic, he noted, because they serve both national and local advertisers via a single platform.

From a monetization standpoint, the 6-year-old company is still in its early days, Calacci said. As in most markets, “you see user growth move up and to the right, and then monetization.”

As Pluto TV grows up, it needs to sell advertisers on the benefits of reaching the viewers already tuning in.

“The audience is growing at a massive rate, and we are playing catch-up,” Calacci said. “Can we play catch-up faster than our predecessors? Absolutely.”