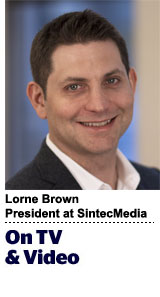 Today’s column is written by Lorne Brown, president at SintecMedia.

Open AP is designed to allow buyers to define an audience segment once, and then buy it across the three networks. In the open letter announcing Open AP, Fox, Turner and Viacom called on other media companies to join the consortium to encourage standardized audience data to grease the wheels in audience buying on TV.

Recently, NBCU announced it’s earmarking $1 billion in audience-targeted TV advertising using its own audience data definitions. As more TV media companies come forward, it will be interesting to see how many of them favor shared data definitions such as OpenAP or prefer to focus on their own. While a consortium makes it easier for buyers to know what they are getting, it diminishes the amount of branding and differentiation media companies can do.

There will inevitably be growing pains as TV goes targeted. As advertisers try to bring their own data to TV companies as they do on digital, TV companies experiment outside of Nielsen and offer new products that need to be proven. There is a risk that too much differentiation will cause complexity much like in digital media.

Luckily, there are other ways that media companies can leapfrog the growing pains that have hampered print companies on digital channels. Audience data is only one of three legs of the stool of an advertising business built on targeting.

Make It Easier To Transact

Even if Modi Media brought its own third-party data definitions to the discussions, that’s a very complex serious of transactions to reach 9 million people. The best thing these companies can do as they jockey for attention is make it easy to transact.

The members of Open AP explained in a recent article that while advertisers will be able to define a segment once, all negotiation and execution will still need to be done separately. This one sentence illustrates just how daunting of a task it is for large media companies to move to audience-targeted media sales, and just how complex it is for buyers to put together a deal that has scale today.

Now is the time for media companies to work out transactional rules, such as common terms and conditions, measurement standards and rules for reporting and make goods. These seemingly small things will eliminate a lot of headaches for both the buy and sell sides and help entice buyers to get used to buying audiences from these companies. For example, the IAB standard terms that guide digital media have heaped the responsibility and cost onto publishers for all delivery issues. This is something that TV companies can avoid if they work good transaction rules out now.

In TV, networks and MVPDs are giants, but in audience targeting, they are just starting out.

If the networks are like specialized markets in the audience-targeted space, with each one selling premium products, then Facebook and Google are the supermarkets – one-stop shops that are faster, easier and bigger. Premium content is an important asset, but it can’t be used as an excuse to avoid upgrading processes. When it comes to buying audiences, advertisers have options that offer convenience and scale through automated technology, and they like it.

Compared to these digital giants, it can take days for an audience-targeted TV media buy to process. Deals pass through many different people and disparate systems to arrive at a first offer. Media companies must not treat every new product offering as a separate part of their business, which hurts the sales process and hinders scale. Any negotiations stretch the time out further. Reporting might only come well past the completion of the campaign. To sell audiences, media companies need to report across platforms, which makes it harder to deliver without careful planning.

While slow and careful negotiations might help media companies preserve prices, it does nothing to stop advertisers from demanding more efficiency and leaving if they don’t get it. TV companies will likely emphasize the need for tight control over inventory and pricing information to maintain negotiating power, but this can backfire if it’s done without advertiser efficiency in mind.

Build Your Seat At The Table The Right Way

As advertisers embraced digital a decade ago, they pushed through a lot of technologies and processes that ended up being costly and complex for sellers. TV companies now have a window of opportunity to avoid the same slippery slope when it comes to audience-targeted media sales by being proactive. TV companies and advertisers must work together to create transaction standards before those standards are determined by third parties. They must also streamline internal processes that drive away buyers who are used to total automation.

EMarketer predicts US digital advertising will reach $83 billion in 2017, with Google claiming about 40% and Facebook getting about half that. More importantly, Facebook’s share is growing by 32% while Google’s is jumping by 15%. Hopefully, these growth numbers are enough to encourage TV media companies to focus on automation and streamlined processes to entice buyers and keep them coming back.